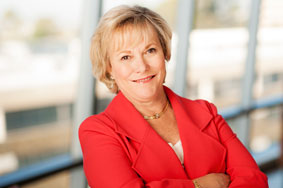 July 12, 2014 (La Mesa) – Grossmont Hospital is mourning the loss of its chief executive officer, Michele Tarbet, who passed away yesterday morning at her home surrounded by her family members, under the care of Grossmont’s hospice care.

An announcement issued jointly by Sharp Healthcare and  Sharp Grossmont Hospital yesterday, voiced “a heavy heart and great sadness” at the news.  “Michele’s passing was peaceful and she left this world with dignity and grace,” he stated. “We will miss her immensely. Fortunately for us, Michele has left an indelible mark on Sharp HealthCare, Grossmont Hospital, the East County, and the countless individuals she worked with and knew.”

Barry Jantz, CEO of the Grossmont Healthcare District, praised Tarbet for her efforts in support of the successful passage of Prop G and for major new construction projects at the hospital.  “ Michele will be missed by us all,” he added.

A Michele Tarbet Memorial Fund will be established at Grossmont Hospital Foundation to benefit Sharp Hospice, the hospital has announced.  Memorial services are pending.

On her Facebook page, Denise Mendiguchia Millage observed, “Heaven now has another angel! Michele's legacy will live on in all she did at Sharp Grossmont Hospital, in all she touched throughout the years and especially in her children.”

On her Linked-In page, Tarbet, a registered nurse, expressed her own philosophy toward patient care.  "When we live The Sharp Experience, we treat everyone the way we would want our loved ones treated."

She has served as the hospital’s senior vice president and chief executive officer since 1996.

Under her leadership, in 2011 the hospital was redesignated with Nursing Magnet Recognition, the highest nursing honor, by the American Nurses Credentialing Center. In addition, as part of Sharp HealthCare, Sharp Grossmont shares in the honor of being selected as a 2007 Malcolm Baldrige Award recipient, the highest presidential honor for quality and organizational excellence in the United States. Sharp Grossmont Hospital become a designated STEMI Center and a Joint Commission Stroke Center of Excellence. Tarbet was also the driving force behind the purchase of two hospice houses to serve the terminally ill.

She was instrumental in the formation of a capital campaign to build a new five-story Emergency and Critical Care Center and helped raised funds for additional projects, including a Heart and Vascular Center, new Central Energy Plant and renovation of a 164-bed patient care tower. Prop G, which she backed, was one of the most successful bond initiatives in California, yielding a 78 percent approval.

Tarbet served as chair of the Boys and Girls Club of East County and the East County Chamber of Commerce. She has also served as a member of the La Mesa Rotary Club and the La Mesa Park and Recreation Foundation Board.

In 1999, she was awarded the YMCA Tribute to Women and Industry “TWIN” Award. She was also honored as the 2001 recipient of the Council on Community Clinic’s “Hero” Award and the 2004 East County Chamber of Commerce’s Women in Leadership Award.