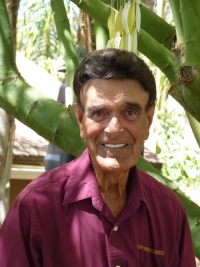 Memorial to be held Thursday, May 12

(Ramona) –Herman Salerno, 81, an Italian opera singer, founder of Salerno Winery and a pioneer in our region’s winemaking industry, has passed away.

Linda McWilliams, president of the San Diego County Vintners Association, remembered Salerno as “a pillar of the early winery community in San Diego County and Ramona. He was an award-winning winemaker and helped and encouraged so many, particularly in the Ramona AVA.” She added, “A visit to his winery was not just about tasting the wine but a view into the entire culture of art,food, old world conversation but also the joy of his operatic voice.”

Born in southern Italy in the Reggio di Calabria region and raised in Argentina,  Salerno performed with opera companies in Argentina, Spain, Venezuela and in the U.S. at the Academy of Music in Philadelphia and the Connecticut Opera. (View video of Salerno singing at his winery in  2011.)

He later opened a bakery in Kearny Mesa that he later sold to San Francisco Sourdough Company in 1985.  A love of wine soon led him to a new career.

He became a winemaking consultant at the Bernardo Winery before purchasing land in Ramona with his wife, Rose, in 1995.  His first commercial wine release, a 2003 Petit Syrah, won a double gold medal at the 2006 Florida State Fair International  Wine Competition.  Since then, his wines have won at least 37 medals in competitions from coast to coast.

In 2014, Herman Salerno received the Trailblazer Award presented by vineyard consultant and Maness Vineyards owner Greg Maness, also a protégé of Salerno. Maness, in presenting the award, said the Salernos “dreamed together of establishing a world class winery.” At his own vineyard in Jamul, Maness reflected,  “Some of those old vines planted decades ago by them are still growing around our adobe house like theirs. They inspire all of us to persevere, laugh, enjoy life and appreciate life’s pleasurable and fleeting moments.”

The Salerno Winery in Ramona featured not only wines, but an outdoor pizza oven where Salerno used his master baking skills and occasionally thrilled guests by singing opera, also bringing in other opera singers to entertain his guests. He also started an impressive sculpture garden with 90 works from the collection of Jaime Chaljón, who later became a co-proprietor of Salerno winery, assuring that Salerno’s devotion to music, wine and culture will continue for future generations of visitors in Ramona.

At the winery website, www.SalernoWinery.com, The Chaljons posted this message: "Jamie and Raquel Chaljon express their deep sadness for the irreparable loss of their dear friend, Herman Salerno, who had always shown them love and affection.  May his soul rest in peace."

A memorial service is planned for 4 p.m. on Thursday, May 12 at Bonham Brothers & Stuart Mortuary, 321 12th Street in Ramona.  A “Herman style” potluck will follow at Salerno Winery for friends seeking to pay their respects.

A letter to remember,

It is a sad day indeed for all of us wine makers and to Rose Salerno and Family.

Herman Salerno meant so much to me and all of us in the industry.

It still remains true generations later that our motivation and inspiration often comes to us from many sources.

Estate to design the original concept vineyards on the property in the 1980's. Paul and Herman spent quite a bit of time together over the years as true Italians do, grafting olive

trees, planting vines on the property, knocking back a few glasses of vino and creating the layouts for the hilltop vineyards. A few years later they made some amazing wines together, we have stashed in a secret wine cellar.

Many of you have also tasted some of the legendary Primitivo Tawny Porto Vino they made together also right here at our place in 1989. Those were the days of seasons in the sun my friends.

here in Jamul, high a top the beautiful rolling hillsides we now call home. Not much was out here 30 plus years ago but their ambitions were tall.

Time unravels many a tale and after we lost Paul, Herman headed north to open Salerno Winery in Ramona. A decade ago our family was first introduced to Herman at his winery and we to became inspired with his heartfelt Casi Cielo stories from the past at the time we knew nothing

about. We were amazed as he took us on a remembrance journey and we caught the same vineyard fever that consumed both him and Paul.

Herman once told me, I love what I do, so I wish I could do it forever. A very meaningful phrase for all of us to live by.

Still today we are inspired by his very words and we continue to complete the work that Paul and Herman started nearly thirty years ago.

Putting a proper end to their story. Here is what I have learned from Herman Salerno.

Let it be known that thru persistence your dreams become activated. Thru activation our minds go into accomplishment mode empowering our thoughts. Once in the accomplishment mode it is hard to turn off the motivation switch. Your heart takes over and you find that all of life's trials

and tribulations are simply moments in time. Frozen memories of things you went thru or accomplished. So why not be fierce in life, do good for  others and seize the moments, but complete what you start.

Next month in June the Casi Cielo Winery finally opens its doors on Saturdays to the general public as a bonded winery for the first time in nearly four decades. All of us at Maness Vineyards are extremely grateful to the Salerno Family for being such exceptional visionaries who influenced many. Our thoughts are now clear, that dreams can come true if you stay loyal to your cause. Even though it may take decades of dedication and persistence in our seasons under the sun.

Perhaps one day we can all put together our stories together about Herman to create a book and movie about his efforts over the passing decades. I believe between us all he would truly appreciate that. For then it would be considered true, that legends never die. They simply

become amazing parts of American history, hero's stamped and forever remembered in paper, film and print along with our memories.

I Hope to see some of you next month at the old stomping grounds still fondly known as Casi CIelo Winery at Maness Vineyards, where dreams do come true. FYI: Appropriately enough, "Casi Cielo" translates into almost heaven. Thank you Herman and Paul for your great vision.

We will miss you my brothers,