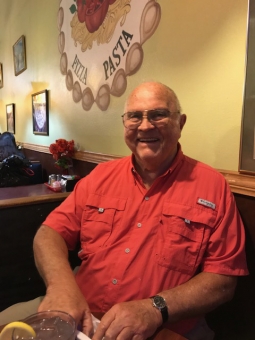 July 11, 2019 (Jacumba Hot Springs) - The East County backcountry lost one of its biggest cheerleaders on June 29, when Howard W. Cook passed away peacefully after a short illness. He gave selflessly to the community, serving as Chair and later Secretary for the Jacumba Sponsor Group and as Board Member of the Jacumba-Boulevard Revitalization Committee.

Cook spearheaded the Jacumba Lake restoration project. He worked tirelessly and sucessfully with other team members in finding a buyer for the Jacumba Spa when it was failing and about to close. This act alone created jobs for local residents and a vibrant gathering place for the community.

Two of the projects he was most proud of included his role as an activist in the campaign to rid Jacumba from the scourge of eye gnats and another to try to keep deep-pocket green energy companies from draining Jacumba’s aquifer and despoiling the land around Jacumba. While a staunch supporter of green energy, Hewas firmly in the camp that it belonged at point of usage and not in massive industrial complexes that denude the land and wreak ecological havoc for humans and wildlife. He stood steadfast in this belief despite vicious personal attacks on his property and family from those with interest in seeing the mega-projects move forward.

He resided in Jacumba, California (later renamed Jacumba Hot Springs) before moving three years ago with his wife, Danielle, to the Coachella Valley to be closer to his son and essential services. Although his body may have resided in La Quinta California, part of his heart remained in San Diego’s backcountry, where he loved to explore wilderness areas and backroads in his Sportsmobile.

Howard Cook was born William Howard Cook in Whittier, California to Quaker parents. After receiving a BA in Business Administration from Whittier College, where he played football, he went on to have a successful career in management consulting. After retiring as a Partner in the International consulting firm of KPMG, LLP Howard took on software training and quality projects for Hughes and Northrop Aircraft. He was an avid reader, historian, bike rider, boater, kayaker, hiker, ocean cruiser and explorer.

His ashes will be scattered in a private family ceremony in the sea off Huntington Harbor where he lived, boated and biked for forty years before moving to Jacumba.

“A man of integrity, confidence, compassion and action, Howard will be sorely missed by all,” his wife, Danielle, says.