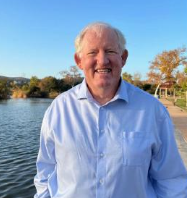 August 5, 2022 (Santee) -- James Peasley, who served on the board of the Padre Dam Municipal Water District for 12 years starting in 2010 and was its current vice president, died Aug. 2, the Santee-based water district announced.

Peasley, who lived in Blossom Valley, was 71. The cause of death wasn’t provided.

“I have been honored to work with Jim for over a decade,” said Board President Bill Pommering. “Our community has lost a friend and a champion of serving the water needs of our community. Our prayers are with his wife Linda and his entire family.”

Peasley was elected to the board for his third term in 2018. During his tenure, he was a strong advocate for ensuring water reliability while trying to keep costs down. To this end, he supported the formation of the East County Advanced Water Purification program, which broke ground earlier this year.

The program will take the area’s sewage now pumped to a wastewater treatment plant in Point Loma, and put it through an extensive filtration and purification process at new facility under construction north of Santee Lakes to produce some 11 million gallons of drinkable water, or about 30 percent of the region’s needs.

Peasley spent the bulk of his nearly 40-year career with the Otay Water District where he served as an engineering manager, according to Padre Dam. He was a registered professional civil engineer.

Augie Caires, a fellow Board member and a former CEO of Padre Dam, said he had been friends and colleague of Peasley’s for more than 30 years. “He was a stand up, wonderful man and honorable in every respect. I will truly miss him on the board.”

The Padre Dam board, which is the lead agency managing the East County Advance Water Purification program, will discuss how it will proceed to fill Peasley’s seat at its next meeting Aug. 17. The board will continue to operate with four members until a new member is seated.

Peasley is survived by his wife Linda, an undisclosed number of children and grandchildren.