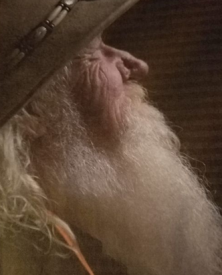 Born Sept. 13, 1949, Hake told the Julian Journal that he met his wife, Diane, in a berry patch. They got married three weeks later, on August 8, 1969.  They raised their family which included adopted children as well as their own.

“I feel so blessed to have been married to Johnny for almost 52 years making amazing memories,” Diane posted on Facebook when she announced his death.  “I could have enjoyed his company for another half a century.”

The couple once owned a flight school in Arizona before moving to Julian. During the 2003 Cedar Fire, they lost their home – along with hundreds of other area residents.

A celebration of life is planned for Sept. 13, his birthday.  Details are not yet available, according to the post on Diane Hake’s Facebook page.

Johnny and Diane trained every CERT out here in Shelter Valley, and left our whole region safer than they found it. A life well lived, and someone who will be long remembered in our little village. Hearts to Diane.