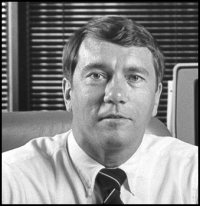 Fetherling helped establish the Los Angeles Times’ San Diego County edition in 1978, serving as editor until the publication closed in 1992. He covered some of our region’s biggest stories including the 1978 PSA plane crash, the 1984 McDonald’s massacre, and the trial of Mayor Roger Hedgecock.

Also a prolific author, Fetherling wrote numerous books including Getting to Angel Island and Comrades In Ink. He also collaborated on many other books, including Mother Jones, the Miners Angel, which won an Award of merit from the Iliinois Historical Society, and The Buckets of Money Retirement Solution.

“He thought the world of the students at PLNU, as we all did of him,” said Dean Nelson, director of Journalism at the school. “He launched many careers in his time with us.”

Born in Baltimore on September 5, 1941, Fetherling received a bachelor’s degree in political science from West Virginia University in 1963 and a master’s from Northwestern University’s Medill School of Journalism in 1964. He later served as a naval officer before going to work at the Portland Oregonian and the Minneapolis Tribune, joining the Los Angeles Times in 1973 as one of the first full-time environmental reporters in the U.S.

He is survived by fiancée, Phyllis Erickson, his two children, Dane of San Diego and Jill of Denver, a brother, George,, of Vancouver, and a grandchild.

San Diego Writers, Ink issued a tribute memorializing Fetherling, recalling him as a “true Southern-style storyteller” who utilized wry humor, carefully chosen words, and clever use of details to bring his writing to life. Writers Ink summed up the literary luminary's talents this way: “Dale Fetherling could tell a fine story.”

Excellent news , I really like this write! I enjoy it so much! I hope you give me more interesting topics to read on. Thanks for give me a good reading moment!