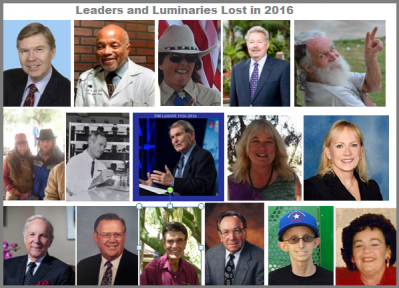 December 28, 2016 (San Diego’s East County) – Their lives made a different to countless people across East County.  Though these noted community leaders passed on in 2016, their legacies live on.

Rick Alexander: A trustee on the Grossmont-Cuyamaca Community College Board for 20 years, Rick Alexander also has worked tirelessly to improve his community through his work in politics and real estate. He was active in the San Diego Association of Realtors and the East County Economic Development Council, but always put family first. He also served as an Army officer and was an accomplished athlete who competed internationally in luge. After suffering a stroke, he passed away in June.

Dr. Richard Butcher:  El Cajon resident and prominent San Diego physician Richard O. Butcher, who died in November of cardiac complications, was honored nationally for his dedication to serving patients in poor and minority communities at his southeast San Diego practice.  He served as president of the National Medical Association, testifying before Congress about healthcare needs for disadvantaged Americans and minorities. He was also president of the San Diego Medical Association, Chief of Staff at Alvarado Hospital, president of Care View Medical Group, and team doctor at Granite Hills High School. A champion of combating chronic diseases in low-income neighborhoods, he co-founded the Multicultural Medical Group to find community-based solutions to health disparities locally. Presenting the Practitioner of the Year award to Dr. Butcher for those efforts last year, Dr. Lawrence L. Sanders Jr., NMA president, stated, “We believe that when the history of this dynamic struggle is written, your name will be deeply etched in its fabric as having inspired and challenged physicians and medical professionals nationwide to address critical issues of health care and medicine.”

Diana Cavender: Diana Cavender had a lifelong passion for horses. Her mother described her as a cowgirl from the first moment she sat on a pony as a child.  She and her husband even exchanged their wedding vows on horseback at his ranch.  A six-year veteran of the Escondido Mounted Patrol, Cavender had ridden in over 50 parades, before her life came to a tragic ending in April when her horse spooked and she fell to the ground after the Lakeside Western Days Parade.

Cliff Diamond:  Cliff Diamond, former El Cajon Police Chief and past interim Chairman of the East County Chamber of Commerce, died in October of cardiac failure while on vacation with his wife, Leslie, in Arizona. Diamond dedicated over 30 years of his life to law enforcement, working for police departments in Arizona and Florida as well as El Cajon, California.  El Cajon Vice Mayor Gary Kendrick remembered Diamond as a “very kind, caring person” who was involved with his community, also working to help homeless people get off the street and into programs that could make a positive difference in their lives.

Victor Earhart:  A skateboarding legend who inspired legions of fans, Ramona resident Victor Earhart died in a motorcycle accident in November.  “Age is only a number; fear is only relative.”  Sector 8, the skateboard company where he worked, posted a video which stated, “Victor Earhart is a shining example of living life to the fullest,” shortly before his untimely demise.

Jim and Kyrie Keefe:  Artists who found solitude and inspiration in rural Potrero, Jim and Kyrie Keefe died when the Border Fire swept over their property in June. The missing couple inspired community members to launch a search, which ended with the tragic discovery of the couple’s bodies, huddled together in boulders behind their home where they sought refuge from the flames. His sister voiced thanks to the brave women who led the search after law enforcement failed to do so 10 days after the fire began. She wrote: “You all did what you could when you could. In Jimmy's words ‘peace, love and light.’"

Robert Kokernot:  A graduate of Grossmont High School’s class of 1940, Dr. Robert Kokernot was inducted into the Hall of Honor at Grossmont in 1967. He received three doctorates, one in veterinary medicine from Texas A&M, one in medicine from Baylor University College of Medicine, and one in epidemiology from John's Hopkins University.  He served as a staff member for the Rockefeller Foundation and was assigned to South Africa and Colombia, with expertise in tropical medicine. Dr. Kokernot worked in South Africa for six years and was on the medical faculty of the Universidad del Valle, Cali, Colombia, from 1961-1963. Upon his return to the United States in 1963, he worked on research at the University of Illinois and served as assistant director of the Center for Zoonosis Research at the University of Illinois. He passed away in September at age 94, but he never forgot his roots. His daughter said that Grossmont High School was “truly dad's safe haven where he gained a desire for learning; a desire for knowledge."

Tim LaHaye: Reverend Tim LaHaye, co-author of the best-selling “Left Behind” Christian book series and founder of local Christian schools, died in July at age 80 of stroke complications. Time Magazine once named LaHaye among the 25 most influential evangelicals in the U.S. Pastor at Scott Memorial Baptist Church, which became Shadow Mountain Community Church in El Cajon, he also founded San Diego Christian College and Christian high schools. He was president of Liberty University, co-hosted a prophecy TV show and helped found the Institute for Creation Research in El Cajon. At the national level, he encouraged Jerry Falwell to start the Moral Majority and served on its board.  He helped found prominent conservative think tanks and served as co-chair of Jack Kemp’s presidential campaign.  His final Twitter message quoted Matthew 6:19-21: “Don’t store up treasures here on earth where they can erode away or may be stolen. Store them in heaven where they will never lose their value and are safe from thieves.  If your profits are in heaven, your heart will be there too.”

Susan Mahalick:  East County Magazine mourned the loss of our “Baja Blog” columnist Susan Mahalick, whose adventuresome life ended at age 60 following an illness. She was the author of My Gold Coast Baja: A Practical Guide, a primer for visitors and those considering moving to Mexico. She also wrote articles for the BajaTimes.com, Ezine.com, San Diego Red, and for the Secretary of Tourism in Mexico.  She lived all over the U.S. before falling in love with the Baja region and settling in at La Misión, Mexico, where she lived for over a decade.

Deborah McElravy: Former president of the Grossmont Healthcare District, Deborah McElravy spent 40 years in the healthcare industry as a practicing pharmacist and member of the healthcare district board, working to improve healthcare for the community. As President, she initiated the renewal lease agreement with Sharp, which was approved by voters with an overwhelming 86.7% vote. She also initiated a free flu clinic at the district’s annual Kid’s Care Fest. But she was most proud of her successful efforts to keep the pediatric unit open at Grossmont Hospital. McElravy passed away in September, but her achievements continue to benefit children and others across East County.

Conrad Prebys:  A philanthropist whose generosity supported numerous San Diego nonprofits, health centers, arts and educational facilities, Conrad Prebys died of cancer in July.  A heart condition as a child prevented Prebys from engaging in strenuous physical activities, turning instead to music and the arts.  After making his fortune in real estate and construction, he became one of San Diego’s major philanthropic donors.  The new student union center at San Diego State University is named for Prebys, as is a music center at the University of California, San Diego and the Conrad Burnham Prebys Medical Discovery Institute in La Jolla. SDSU president Elliot Hirshman called Prebys ”a great man and a great spirit” whose “optimism and selfless generosity have forever changed our campus and the entire San Diego region.”

Dave Price:  David C. Price was instrumental in formation and operation of several local businesses and real estate developments and was actively involved with philanthropic ventures benefiting San Diego County.  He served eight years on the Cajon Valley School District Board in the 1960s, residing on Mt. Helix before moving to Carlsbad.  He was a 1947 graduate of Grossmont High School, earned a bachelor’s degree in chemistry from San Diego State.  After serving in the Army he worked in the aeronautical industry for 15 years, including as General Manager of Advanced Structures in La Mesa. Price started 3D Industries, a metal manufacturer and steel contracting business, in San Diego with two partners. He diversified into real estate development in the late 1980s. Many area philanthropic organizations have benefited from a trust run for many years by Price and his wife, Mary Ann. During retirement he was a leading fundraiser in the effort to build a local campus for Bethel Seminary and was a loyal supporter of youth activities. Price passed away in January at age 86.

Herman Salerno:  A pioneer in San Diego County’s winemaking industry, Herman Salerno was an opera singer in Italy before coming to America and opening first a bakery and later, the Salerno Winery in Ramona.  He also mentored many other local winemakers, including Greg Maness, who said of Herman and his wife, Rose, “They inspire all of us to persevere, laugh, enjoy life and appreciate life’s pleasurable and fleeting moments.” Salerno left this world in May at age 81, but his passion lives on at his winery and in the many other vintners he inspired.

B.W. “Stoney” Stone: Known as “Mr. East County,” B.W. “Stoney” Stone of Santee made his fortune in the banking industry and served as president of Cajon Valley Bank.  But he is best known as a philanthropist with a passion to help children, recognized with numerous awards and humanitarian honors.  He founded the East County Toy and Food Drive 42 years ago. Since then, over 50,000 children have been helped to have a merrier Christmas season.  Stone also formed Stoney’s Kids to raise funds for a D.A.R.E. program at the request of El Cajon Police. Since 1981, Stoney’s Kids has raised over $800,000 to help underprivileged kids year-round, funding after-school youth programs, summer camps, sports and musical programs, playgrounds and exercise equipment for the disabled. The vision lives on through Stoney’s Legacy, established after his passing in April, because as Stoney Stone often said, “It’s all about the kids.”

Ryan Wilcox: Grossmont High School student Ryan Wilcox lost his life-long battle with cancer t age 18, but his courageous battle captured the hearts of people across the community, even drawing Hollywood celebrities to his home in El Cajon. A dedicated fan of Marvel Comics, especially Captain America, Ryan was surprised by fellow students in May with a superhero-themed rally including a taped message from actor Chris Evans, star of the movie “Captain America: Civil War.” Soon after, co-stars of the ”Avengers” movies Gwyneth Paltrow, Robert Downey Jr. and Evans mad a surprise visit to Ryan’s home. Grossmont’s football team named him an honorary team captain and NASCAR champion Jimmie Johnson chatted with Ryan on Facebook.  A Facebook post announcing his death in September concluded, “Fly high Superman....you are free.”

Carol Yates:  Long-time Campo resident Carol Yates is remembered as an active auxiliary member of the John Finn VFW Post 2080 and of the Mountain Empire Homemakers Club. She worked for many years at the historic Dogpatch bar, which burned down in 1987, in the Canyon City neighborhood of Campo. In recent years, she was a well-known face at senior lunches at the community center in Campo. She married Aubrey Yates in 1970; the couple lived in El Cajon and Jamul before settling in Campo in 1976. Aubrey died in 2003 and Carol remained in the Campo community until her death in November at her home.