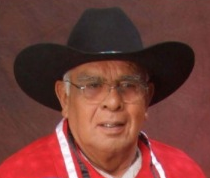 April 9, 2015 (Manzanita Reservation)—For the past 18 years, Leroy Joseph Elliott has served as Chairman of the Manzanita Band of the Kumeyaay Nation.  A respected leader and elder in the Native American community who led efforts to revive cultural traditions, Chairman Elliott passed away on March 18, 2015.

Born on April 18, 1943 to John Elliott and Adelina Aswayo at the Soboda Indian Hospital in Riverside County, Elliott was raised on the Manzanita Indian reservation in East County and attended Mountain Empire High School.  He served as a firefighter with the U.S. Forest Service and as Assistant Fire Chief of the Campo Reservation Fire Department.

According to California Indian Education, Elliott was the last fluent speaker of the Kumeyaay language at Manzanita.  He dedicated himself to preserving and teaching the Kumeyaay language to his people, advocating for continuance of the language, traditions, cultures and beliefs.   He led efforts to revive bird songs, traditions passed down through thousands of years of Kumeyaay history, preserving them for future generations.

In a documentary produced by the Sycuan tribe on Kumeyaay history titled Our People, Our Culture, Our History, Elliott recalling listening to tribal elders singing the ancient bird songs – songs  that tell the history of the Kumeyaay people, and t that were nearly forgotten due to forced assimilation of Native Americans into the white man’s culture.  “It feels good at heart because I’m carrying on,” he said in the documentary. Today, there are 50 to 60 bird singers carrying on those traditions taught by Elliott to the next generation, according to his obituary posted at Legacy.com.

Elliott also served as Chairman of the Southern California Tribal Chairman’s Association executive committee and was recognized as a “Honored Elder” at the California Indian Education Association conference in 2009.

Sycuan’s former tribal Chairman Daniel Tucker recalls Chairman Elliott as “an ardent supporter of tribal sovereign rights and cultural preservation. ..He was both a spiritual and personal mentor of mine.”

Anthony Pico, former Chairman of the Viejas band of the Kumeyaay nation, recalled that even in childhood, Elliott was “a peacemaker. He wondered why some people choose confrontation over harmony. Why people chose dishonesty over truthfulness. Why people chose indifference over compassion…He was raised by the older people who gave him a profound insight into much of what was good about being Kumeyaay—values like generosity, patience, tenacity, active compassion, humility and having awe of the old way of life. .Often he chose what was noble rather than what was easy or expedient.”

Pico credits Elliott with being “singly responsible directly or indirectly for the teaching of Kumeyaay Bird Songs to every singer alive today.” He led his people using “traditional values while embracing modern leadership ideas,” Pico added.

Elliott was honored by KPBS and Union Bank as a local hero in 2013.  Despite challenges including unemployment on his reservation over 50 percent and families living on half of the federal poverty level, KPBS noted that Chairman Elliott sought opportunities to provide much-needed jobs and services for his tribe.  “Mr. Elliott’s dedication to the preservation of his Native American heritage include his efforts to advocate for tribes in an effort to preserve cultural property, sacred sites, endangered species and critical habitat,” KPBS noted, adding that Elliott was among the distinguished community leaders invited to greet the Dali Lama at San Diego State University.

Elliott spoke out about health risks he believed wind turbines on the neighboring Campo reservation posed for his people and in 2012, wrote a letter imploring County planners to postpone a decision on a county wind ordinance until after a university health  study of Manzanita tribal members.  He voiced fears that multiple proposed wind projects including Tule Wind in McCain Valley “will entrap Manzanita on our north and east borders” which combined with the existing turbines on the southern border “will create a cumulative effect that most likely tenders our residential reservation land uninhabitable. We have been on these lands for thousands of years and we the Kumeyaay are the original stewards of San Diego County.”

John Christman, a Viejas tribal member and bird singer who studied under Elliott, noted that the term Grandfather signifies deep affection and respect among Indians. Christman concluded,  “He loved his own family and they are devoted to him, yet he had heart enough to be Grandfather to so many others.”

Elliott often led ceremonies at funerals and wakes for others,  some lasting 24 hours or longer. After a mass at Our Lady of the Rosary Church and a two-day wake, Roy Elliott was laid to rest at the cemetery on the Manzanita Indian Reservation.