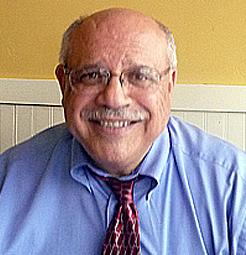 Casuto’s son, Loren, paid tribute to his father on Facebook: “I’ve been blessed in so many ways in life and one of the biggest was my father,” he wrote. “I learned so much about bravery, fighting for one’s convictions, and the importance of family and community from him. And, of course, there was so much more I received from him: a hunger for reading, an interest in politics and international affairs, a crazy sense of humor, good comedic timing, a love of New York-style pizza and more.  Those all will stay with me forever even as my father has gone to his eternal rest.”

“Small in physical stature, he was a giant advocate for social justice, human decency, and all things Jewish,” commented Rabbi Wayne Dosick of the Elijah Minyan upon being made aware of Casuto’s passing.  “His passionate voice loved and protected our San Diego Jewish community, the Jewish people everywhere, and our precious State of Israel.  And he was a real mensch with a sweet soul and a great sense of humor.”

“I am so, so sorry to hear that,” exclaimed Leslie Winkelman Lyons, a former director of the Jewish Community Relations Council (JCRC) of the Jewish Federation of San Diego who had worked with Casuto on many community-building initiatives.

Jack Morgentern commented that he has seen Casuto only recently at D.Z. Akin’s Delicatessen where they discussed his experiences with Morgenstern’s late mother, Holocaust Survivor and Lecturer Gussie Zaks.  “They worked on many projects together,” Morgenstern said.  “He was an icon in San Diego; he will be missed.”

As tributes continued to pour in, Casuto was remembered for his self-deprecating sense of humor, his bravery in the face of threats made against him and his family, and for being the go-to spokesman for the Jewish community whenever hate crimes against Jews or any other group occurred.  Casuto spent 37 years as an ADL staff member, the last 32 of them, from 1978 to 2010, as the civil rights group’s voice in San Diego County.

Before arriving in San Diego County, he had worked for the ADL in Washington D.C.; Columbus, Ohio; and Indianapolis.  Harry and Ellie Nadler, two local ADL supporters, immediately arranged for Casuto to meet San Diego Police Chief Bill Kolender, who was the first Jew to become San Diego’s top policeman.  The two men became good friends, with Kolender recommending Casuto for appointment to the Integration Task Force which Kolender chaired in response to a court order calling for an end to de facto segregation of the San Diego Unified School District.

“That began the whole process of the ADL reaching out to non-Jewish communities and organizations,” Casuto once commented. “Bill enabled us very quickly to be able to meet on a very important level the leaders of the various communities and important organizations. It is one thing to call community groups together to commiserate… and it is most meaningful when you engage on projects of importance to other community organizations.”

Casuto regularly taught law enforcement officers about the effect of hate crimes on victims and their communities.  He lectured at the San Diego Police Academy and the Federal Law Enforcement Training Center, among other venues, that “police need to understand why a person is assaulted. In most cases, the criminal and the victim don’t know each other. The community the victim belongs to is being sent a message: ‘You are unimportant, you are unprotected, you don’t belong here, we want you out.’ So, the degree that law enforcement organizations can join together to provide a kind of comfort, that is important.”

Prior to inaugurating such training sessions, Casuto explained, “We realized that police are trained to look at the seriousness of a crime by injury, theft, or damage, but very often with hate crimes, the injury is internal.” Hate crimes are not only someone being beaten up or property being vandalized, but “often there will be a threatening phone call in the night.  Police have to know that there is a way to deal with this type of incident that the victim will be given some type of comfort, that they are not alone.”

On various occasions, Casuto personally was the target of haters. He often was threatened, his home telephone number and address were published by extremist websites, and he had to install monitors, locks, and other defensive devices at his home and his offices.

With his wife Doreen and sons Loren and Simon living at home, Casuto’s family felt quite vulnerable but, he said, they bravely withstood the threats, never asking him to change jobs.  Doreen “knew how important my work was but she also knew that if we cut bait and ran things would get worse for the community.  It was unpleasant for her to see me walking out wearing a (bullet proof) vest,” he said.

Although he was a target of the haters, he never shied from representing the Jewish community to the media, nor in denouncing injustice.  Did he get scared? “Of course, I get scared,” he said. “Any individual who does not get scared sometimes is a fool.  Does it stop me from doing what I think I have to do?  Generally not.”

Among the racists who targeted Casuto was Tom Metzger, a former Grand Dragon of the Ku Klux Klan and the founder of the White Aryan Resistance, and Alec Curtis, who was imprisoned for vandalism targeting a synagogue, the Heartland human relations agency, and the offices of then Congressman Bob Filner.”

Metzger’s knack for getting publicity generated many contributions and followers for the ADL, which stood in opposition to Metzger’s philosophy of hate.  It also generated ADL initiatives for which Casuto won recognition, such as San Diego County’s Hate Crime Registry and the seminars he conducted with law enforcement agencies.  Casuto also helped to inaugurate the ‘World of Difference’ program in schools, acquainting students with America’s diverse population.

Lee Ann Kim, a former reporter for KGTV-Channel 10 who went on to become an executive with the Asian Film Festival, in an interview coincident with Casuto’s retirement in 2010 said that Casuto had media savvy.  “Morning, noon, or night that man would always be available for an interview (his poor family!) He completely understands the importance of speaking to the media, and he has this uncanny ability to speak in ‘soundbites.’  He always delivered his message to the public with passion, authority, and urgency.”

Casuto’s retirement brought many stories about his sense of humor.  Short in stature, Casuto liked to quip that he was “5’6 on a good day.”  At a roast, Kolender, who then was Sheriff of San Diego, joked “I’ve had it with this guy, up to here” – motioning to somewhere above his belt.  Dan Schaffer, a columnist for the now defunct San Diego Jewish Times, loved to quote Casuto as saying that he doesn’t get upset with people because “I don’t have long toes.” Monsignor Dennis Mikulanis, vicar of interfaith and ecumenical relations for the Roman Catholic Diocese, said “Morris is a giant among men – and not just in Lilliput.”

Casuto reflected at the time that his humor “served a lot of functions.  One, it had the tendency to mask the extraordinary seriousness with which I take this job, and the sense of obligation I feel to the community, both Jewish and general.  I have also found—and it is not planned, I assure you, I’m not that smart – I’ve also found that humor can defuse some very difficult situations.”

He told of an initial meeting with a police lieutenant who headed the criminal intelligence division.  “We were having a really stilted, stultifying conversation and I said, ‘Look I understand that your job is to get as much information out of me as possible while at the same time saying as little to me as possible – like the conversation we are having now.’  And he started to laugh.  That broke the ice and we became friends.”

Bill Gore, who recently retired as San Diego County Sheriff, once recalled that the Casutos would host Passover seders at their home. One year when Gore was serving as the FBI’s Special Agent in Charge in San Diego,  Casuto realized that he was late inviting Gore. When he telephoned Gore’s home to extend the invitation, Gore’s wife, Natalie, told him: “I asked Bill if we had been dropped from the A-List this year …. His response was ‘it doesn’t make any difference, we’re still going!’”

He also was besieged with invitations to serve on boards, too many to accept.  He did become in 2011 a member of the Advisory Board of the Joan B. Kroc School of Peace Studies at the University of San Diego; a board member in 2014 of the National Veterans Transition Services, Inc., known as the Reboot program; and also in 2014 a board member of the Monarch School serving the children of homeless families.

Born September 30, 1942 in The Bronx, New York, to a Sephardic family that traced its roots to Turkey, he was the son of Samuel and Laura Casuto. He is survived by his wife, the former Doreen Roberta Sherwood-Safir; his sons Loren and Simon; their wives respectively Robyn and Stefenie; and one granddaughter, Chloe, the daughter of Simon and Stefenie.

“ADL San Diego is saddened to learn of the passing of Morris Casuto, our founding regional director,” said Tammy Gillies, his successor in that post. “Morris was an integral part of ADL and was highly regarded by all of his colleagues. Morris was a leader in safety and security for the Jewish community, and was a force to be reckoned with.  He was a warrior for the Jewish people and a voice for anyone who was a target of hate.  We are grateful for the foundation that Morris laid and proud to continue his work.”

Some other comments that came in after this article was initially posted:

—Christine Casuto: As his sister in law; we visited his home in San Diego, or when he would come to the East to visit; there was always laughter…and of course, we had to get him pizza for dinner.

—Judi Ehrenfried Gottschalk: My mom Agathe Ehrenfried also worked with him on projects. She was a survivor.
–Rabbi Moishe Leider, Chabad of University City: So sorry to hear of Morris’s passing. He was a real mentch. At a time when society is so polarized, Morris was there for everyone and was everyone’s friend. A delightful sense of humor diffused many a crisis. We will miss him.

–Enrique Morones, founder of Gente Unida:  So sad to learn of the passing of my friend Morris He was such a visionary, a friend and a teacher. He brought the ADL to the world. He was inclusive of all; he built bridges not walls. Shalom my friend.