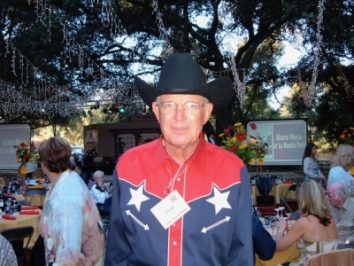 September 30, 2018 (Jamul) – Paul Ernest Jacob, 80, a Jamul community leader, retired Naval aviator and husband of Supervisor Dianne Jacob, died September 23rd of Parkinson’s disease. Dedicated to improving fire safety for his community, he provided his ranch for use as an emergency shelter and fire operations hub during wildfires.

He was also a founding member of the Jamul Dulzura Community Planning Group and was devoted to the East County YMCA. He helped organize “The Branding,” a fundraising gala held at the Jacob ranch for 14 years, raising over $1.5 million for local Y programs.

Deerhorn Valley Antler editor  Kim Hamilton says Paul Jacob was “beloved” by their neighbors, adding, “He and his wife, Dianne, were the backbone of the community we know and call home today.”

She recalls that during a search for a fire station location 30 years ago, the Jacobs held community potlucks in a tool shed where an old fire rig was housed.  “Paul attended all our community meetings—always that quiet voice of reason and steadiness,” she recalls, adding that she often sought out his advice. “While his physical presence is sorely missed, his legacy is all around us, every day.”

Paul was committed to keeping his wildfire-prone community safe. He made improvements to the ranch so it could served as a shelter and gathering spot during disasters, also expanding irrigation to provide firefighters easier access to water.

A hay field on the Jacob ranch housed hundreds of fire responders during the 2007 Harris Fire, serving as a hub for Cal Fire and other agencies.  Jamul resident fleeing the massive 2007 Harris Fire found sanctuary on the ranch. In 1991, he donated a section of land for construction of a volunteer fire station.

Hamilton recalls. “Today, our Deerhorn Valley Fire Station stands on land that was once Jacob property,” she adds. “The generosity of Paul and Dianne is without measure.”

Born December 7, 1937, Paul Jacob was the first son of Bertha and Ernest Jacob. He was born and raised in Pittsburgh, PA and worked at South Hills Country Club, where his father was golf course superintendent. A natural leader at Carrick High School, he received a scholarship for excellence in track, varsity basketball and academics. He attended the University of Pittsburgh. 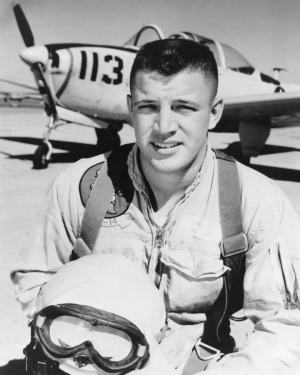 “His honesty and integrity were second to none,” the family recalls in an obituary statement. “While in high school he was recognized for voluntarily returning a $10 bill he had found.

In 1958, he was accepted into the Naval Aviation Cadet program. He completed flight training, earned his Navy Wings of Gold, and was designated a Naval Aviator in 1960.  Ordered to the Naval Air Station Miramar, then an isolated base north of dairy farms in Mission Valley, he developed a love for the San Diego region and never left.

He joined VFP-63 at NAS Miramar, flying the photo reconnaissance version of the F-8 Crusader.  His navy tour was extended to support operations during the 1962 Cuban missile crisis.

While stationed at NAS Miramar, he met his future wife, a school teacher, Dianne Mueller, at Clairemont Bowling Alley. They were married in December 1961

After his naval service, he earned a bachelor’s degree at San Diego State College.  In 1965, he began his civilian aviation career with Trans World Airlines (TWA), flying Boeing 707 and Lockheed L-1011 aircraft.  He was especially proud of qualifying as a TWA Captain in 1979.  He retired from TWA in 1991 after 26 years with a spotless record, never missing a flight.

In 1972, the Jacobs moved to their ranch in Jamul’s Deerhorn Valley, where they raised Black Angus cattle. Paul always enjoyed returning home to the ranch.  In addition to his community volunteer work, he also enjoyed collecting and working on antique cars including a 1929 Model A.

The ranch is also where future farmers come to learn their trade. Thanks to Paul, agriculture students at El Capitan High School in Lakeside are allowed to grow hay on the property.

Paul Jacob was predeceased in November 2017 by his sister, Margaret. He is survived by his wife, County Supervisor Dianne Jacob his son Tom, and brother Glenn Jacob. The family thanks his HomeInStead caregivers, Erin, Shannon and Jonny for their helpm as well as Sharp Hospice.

A celebration of his life will be planned at a future date on the Jacob ranch in Jamul. In lieu of flowers, the family suggests memorial gifts to the McGrath Family YMCA, 12006 Campo Road, Spring Valley, CA 91978 and to Sharp Hospice.