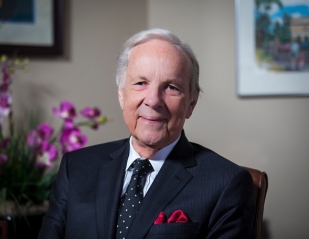 “Born with a giving spirit, Conrad’s deep generosity has helped strengthen and enrich the community in many important ways, including health care, medical research, music, theater, youth services and wildlife preservation,” a statement issued by his family reads.

A heart condition as a child in Indiana prevented Prebys from engaging in strenuous physical activities, turning instead to music and the arts.  After making his fortune in real estate and construction, he became one of San Diego’s major philanthropists.

The new Conrad Prebys Aztec Student Union at San Diego State University is named for Prebys, as is the Sanford Burnham Prebys Medical Discovery Institute in La Jolla and the Conrad Prebys Music Center at the University of California, San Diego. He supported cardiovascular research at Scripps.

UCSD Chancellor Pradeep Khosla called Prebys a “dear friend and a steadfast supporter” of the campus, adding, “Conrad touched so many lives through his generosity and kindness, and has left a lasting impact on our campus, our community, and our world.”

San Diego City Councilman Todd Gloria, on Twitter, remembered Prebys as a “true gentleman and generous benefactor. Many of our civic treasures are better because of him.”

He is survived by his life partner, Debbie Turner.  Memorial services have not yet been announced and the family has asked for privacy during their time of loss.