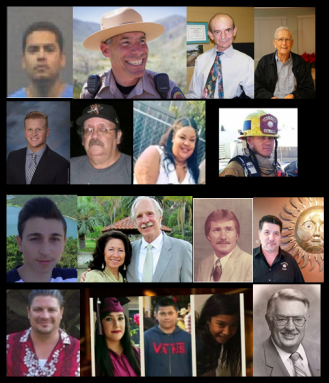 December 24, 2017 (San Diego’s East County) – Far too many local leaders and luminarieswho touched our lives and made a difference in our community took leave of this earth in 2017.

Below are some of the most prominent and noteworthy East County figures who passed on in the past year, listed in alphabetical order:

Frank Anaya:  22-year-old inmate firefighter Frank Anaya suffered fatal injuries from a chainsaw while cutting a fire break during a brush fire in Lakeside July 5th and died a week later following multiple surgeries.  He was one of 3,900 inmate firefighters in California, unsung heroes who put their lives on the line to keep communities safe.

Steve Bier:  Anza-Borrego Desert State Park Ranger Steve Bier died in a shooting incident April 1st.  Bier served as an ambassador for the state park to the community, school groups and the media, also heading up the annual Desert Bighorn Sheep count.  Norb Rhumke, on behalf of the Park Service, called Bier a “tremendous individual” but voiced confidence that Bier is now “playing ranger in a better place.”

Bill Bodry:  Champion of the disabled Bill Bodry died on his 72nd birthday on June 15th.  Paralyzed at age 27 from a spinal cord injury sustained during surgery, Bodry went on to found the Challenge Center in La Mesa, helping countless other disabled patients to walk, talk, and regain independence.

Gordon Bosma:  Long-time El Cajon resident Gordon Bosma, former postal union leader and local president of the American Association of Retired Persons (AARP), died on May 29th.  He also served as treasurer, board member and voter registration chairman of the East County Democratic Club, where past president Bonnie Price recalled him as a “gentle giant” who always looked out for others.

William Burton:  William Burton, 17, a senior and star football player at Granite Hills High School, had been named to the CIF All-San Diego first defense team. He also played on the school’s baseball team.  But his promising future came to a tragic end on December 11th in a motor vehicle collision in Alpine. A candlelight memorial service at the school drew hundreds who recalled him as a man of character known to friends as “Mr. Granite Hills.”

Bill Dickens:  Best known as a high-school sports writer and founder of  EastCountySports.com, Bill Dickens died in November after suffering from Alzheimer’s and Parkinson’s disease. In his career, he also reported on Super Bowls, the World Series, Padres, Charters, local sports luminaries such as NBA superstar Bill Walton, and more. He was known for making every team and player feel as if they were his favorite, recalled his son, David, who added that his father taught if you treat everyone that way in life, “you’re going to be successful.”

Fodingham left behind her husband, Chris Fondo, a Marine, and their two sons. Fondo’s anguish was evident in his Facebook post, “It’s so hard…my life will never be the same.  My heart, my world, and best friend, and mother of my children (while carrying our daughter) was taken from me….I’m not ready to raise two boys on my own.”

Cory  Iverson:  Cal-Fire engineer Cory Iverson, 32, lost his life battling the Thomas Fire in Ventura County on December 14th. Stationed in Dulzura and a resident of Escondido, he leaves behind a 2-year-old child and  wife expecting their second child. Cal Fire and County Fire Chief Tony Meacham praised Iverson as “a great young man, somebody who really loved his job." Governor Jerry Brown ordered flags at the capitol flown at half mast in Iverson’s honor.  A procession to bring his body home spanned several counties, drawing firefighters and members of the public standing in salute on every overpass along the way – paying homage to a fallen hero.

Gordon Jones:  President of the La Mesa Historical Society for eight years, Gordon Jone’s also served on the city’s historic preservation commission and founded the La Mesa Historic Homes tour. He died January 12th at his home in La Mesa Village after battling chronic pulmonary disease. A message from the historical society stated, “He was a person that truly embodied the spirit of celebrating La Mesa's history and he will truly be missed by all.”

Ryan Mitchell:  Cal-Fire Captain Ryan Mitchell took his own life at the Pine Valley bridge on November 6th, shortly after ending his shift. He was stationed at Cal -Fire’s  Monte Vista headquarters on Jamacha Road at Station 20. The tragedy shines a spotlight on a troubling fact: more firefighters die each year of suicide than from fighting fires, a fact that an organized called Saving Those Who Save Others is trying to change.

Mohammed al-Mustafa:  His family fled war-torn Syria to give their only son a brighter future in America. They came to El Cajon, where Mohammed al-Mustafa, 17, soon made friends. But in April, his young life came to a tragic end. While on his first-ever trip to the beach with friends, he was pulled under by a rip current and drowned.  His church, St. Thomas More Catholic parish, posted these words of Christ on its website: ““I was a refugee, and you welcomed me” as a reminder that Christianity teaches generosity toward refugees and immigrants.

George and Gladys Novinger: Owners of the Vineyard Hacienda winery and bed and breakfast in Spring Valley, George and Gladys Novinger’s Hawaiian vacation ended in tragedy when they were swept over the top of Rainbow Falls near Hilo. George Novinger was a retired diplomat in the U.S. foreign service who served in many global locations and was also active on the San Diego World Affairs Council and San Diego’s International Affairs Board. In addition, he was a member of the Jamul-Dulzura Committee Planning Group. Gladys Novinger, a native of Peru, devoted efforts to raise funds to create a House of Peru cottage in Balboa Park. Neighbor Greg Maness recalled them this way: “Every moment of their lives was filled with accomplishing wonderful things.”

H. Dail Rankin: An All-State Insurance agent in La Mesa and El Cajon as well as a former Standard Brands Paint store manager, H. Dail Rankin was also known for organizing high school reunions at Lincoln High School.  He passed away of a heart attack on June 14th and was remember by family as a man who “always worked hard, played hard, and loved to dance.”

Miguel Angel Rojas:  Miguel Angel Rojas, 54, owner of the La Torta Mexican restaurant in La Mesa, died on September 10th after suffering a stroke. He opened the restaurant in 1994, which is now operated by his wife, Felicia, and their daughters. On a GoFundMe page to help his family,   he was remembered as a kind family man and an icon of La Mesa.

Greg Scott: Spring Valley resident Gregory Lawrence Scott worked for Crownair Aviation and was a passionate hockey fan. He died in a collision on I-15 on June 17th while on his way home from a hockey game. His wife and childhood sweetheart, Christy Scott, is known to many as the former Alpine Sun news editor. The couple had two young children, who lost their father one day before Father’s Day.

William Thomas Verbeck: Co-owner of Grossmont Escrow and a successful real estate developer,  William “Bill” Thomas Verbeck also had a commitment to give back to his community. He served on the Helix Water District board and was active in Kiwanis Club of La Mesa, the El Cajon Elks Lodge, Free Masons, and la Mesa Volunteer Police Patrol. His generosity also benefitted organizations ranging from Sharp Grossmont Hospital Foundation to the Boys and Girls Club of East County, and many others. Also an Air Force veteran, Verbeck passed away at his home in Spring Valley on September 27th at the age of 90, with his friends by his side.