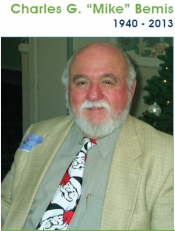 May 2, 2013 (San Diego’s East County) – Charles G.  “Mike Bemis,” co-founder and first president of the San Diego Association of Geologists, died April 27 following a long battle with leukemia.  His wife, Shannon O’Dunn, was at his side.

Bemis was recently bestowed the 2013 Baylor Brooks Honored SDSU Alumni Award. He had a 50-year career of contributions to the engineering geology profession.

Born in 1940, he received his Baccalaureate in Geology from San Diego State University and went to work for the California Department of Highways in 1963. He spent 11 years at Woodward-Clyde Consultants, directing geotechnical investigations domestically and overseas. He later worked at Robert Prater & Associates  and at Bemis-Dikes before joining  Ninyo & Moore, where he served for the past 24 years.

An avid fisherman, hunter and gardener, Bemis was a strong family man and the father of four children.  He was known for his sense of humor and warm personality.

On May 9, Bemis will be honored by the American Public Works Association, which will present its 2013 Outstanding Service Private Sector Award posthumously.