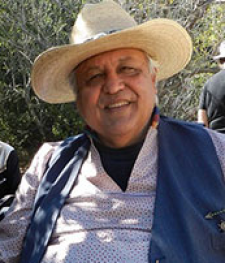 February 27, 2015 (San Diego) – Roy Cook, founding journalist of the California Indian Education site and publisher of the website www.americanindiansource.com, died in his San Diego home on February 18, 2015 at age 71.  KPBS named him an American Indian Heritage Month Local Hero in 2014 for his many accomplishments.

“The Southern California Indian community lost a local hero with the passing of our beloved friend, Roy Cook,” an obituary posted at California Indian Education states. “…his regular journalistic contributions will be greatly missed by all who read his warm and informative feature news articles over the years. (View his biography here.)

Funeral services will be held on March 7 at 10 a.m. at Ron and Virginia Christman’s home, 56 Viejas Grade Road on the Viejas reservation in Alpine. A potluck will follow.

“America's first peoples have endured, and they remain a vital cultural, political, social, and moral presence. Tribal America has brought to this great country certain human values and political ideas that have become ingrained in the spirit of the United States of America,” Cook said in accepting his award from KPBS.

A member of the Opata-Oodham and Mazopiye Wishaha tribes, Cook was born in 1943 in Tucson and moved to Southern California as a young boy.

Kumeyaay.com reported that Cook, a U.S. Special Forces Army soldier, did tours with the U.S. Army Airborne, and Green Beret Special Forces during the Vietnam era. As the elected president of the San Diego American Indian Warriors Association and its official historian, as well as the historian for the Southern California American Indian Resource Center, he appreciated the opportunities he had to teach.

He was invited by Palomar College to teach a summer course on the Pala Indian reservation. Cook’s passion for teaching led him to a position at Grossmont College, where he ended up serving as Chairman of the Multicultural Studies Department, and had a full teaching load with classes that included Survey of American Indian Art, American Indian Lifestyles, and History and Culture of the Californian Indian.

He also held positions at Mesa Community College, where he taught art for eight years, as well as at Southwestern and San Diego City Colleges.

A 36-year member of the Golden State Gourd Dance Society, he also spent the last 20 years as an associate member of the Western Oklahoma Comanche Gourd Clan, honoring those who came before him.

"Throughout my life," Cook said, "elders would just start talking to me and would find a simpatico identity and they would share their experiences. I found that to be a fountain of knowledge to take with me and thereby in some way surrender that to the next generation.”