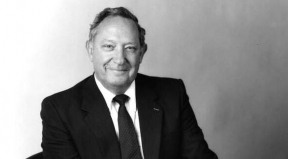 San Diego State University’s sixth president, who steered the institution through a transformative period of growth and expansion, has died.

June 18, 2021 (San Diego) - Thomas B. Day, the sixth president of San Diego State University who began an 18-year-tenure in 1978 and saw the creation of six joint doctoral programs, significantly increased faculty research and led a major expansion of the university.

“Thomas Day was one of the most transformative presidents in the history of our great university,” said SDSU President Adela de la Torre, who first met Day early in her career. “That SDSU has competitive joint doctoral programs, a strong and diverse research enterprise, and such national recognition is credit to Day’s leadership and service to the faculty and students.”

A theoretical physicist, Day championed a “teacher-scholar” model during his 18 years as president, advancing SDSU as a public research university and leaving a significant legacy on campus and throughout the San Diego region.

“Day was a legendary leader within the CSU system for his transformative vision of pushing SDSU to become an exemplar of a teacher-scholar research intensive institution, which would be on an equal footing with the University of California,” de la Torre said. “Day was leap years ahead in identifying student access and academic excellence as equal and paramount to the future success of any public university. Day’s legacy and imprint on SDSU, our region, and on higher education is formidable and will be remembered for decades to come.”

Day arrived at SDSU in July 1978, less than a month after California voters approved Proposition 13 and a time, he once recalled, when “the ceiling was about to collapse on higher education.” He worked from a corner office in the Administration building near Hardy Tower and behind a statue of one of his predecessors, Samuel Black.

Day’s tenure from 1978 to 1996 was a time of financial challenges that included tuition increases and threatened faculty layoffs, but he expanded the campus, opened a North County campus in Vista that blazed a trail for California State University San Marcos and created what is now the School of Public Health as well as the School of Communication. The School of Public Health required approval from the State Legislature; it now produces about 75% of the public health workforce in San Diego.

The emergence of SDSU as a major public research university was a main theme of the Day era, as the president stressed quality undergraduate teaching and research, as well as professional and graduate programs.

“Day was a strong and determined president for SDSU. He acted with a force that arose from his deep dedication to the university,” said SDSU President Emerita Sally Roush. “I had the great honor to work closely with him on many significant issues, and was able to witness first hand the abiding commitment to SDSU that was the foundation for his leadership. I will miss him greatly.”

SDSU reached for higher quality and began to gain greater recognition for its programs focused on border issues, the Pacific Rim and business development among underrepresented professionals and communities of color.

Day understood that it takes more than one individual to transform a university.

“The history of any great university is the composite of thousands of people — students, faculty, staff and administrators — building year after year on illustrious predecessors,” Day said in 1995. “SDSU is certainly no exception.”

Day advocated for diversity, stressing the importance of recruiting and hiring staff and faculty that reflected the growing racial, ethnic and gender diversity of the San Diego region. He initiated the Freshman Success Program — now called the Thomas B. Day Student Success Programs — to ensure the success of all students by providing paths to student support services and enriched learning opportunities.

The Thomas B. and Anne K. Day Quad in the university’s Engineering and Interdisciplinary Sciences Complex was named to honor Day’s belief that SDSU should embrace both teaching and research. A ribbon-cutting ceremony for the building in January 2018 was Day’s last visit to campus.

“The very ethos of Thomas Day’s commitment to SDSU was in elevating its research excellence, contributions to student learning, athletic performance and community impact. He advanced equitable opportunities for people long underserved in higher education and put a focal point on philanthropy,” said SDSU Campanile Foundation Board Chair Nikki Clay.

“Day, along with his family, is beloved and has made a big impact. It may not be apparent, but every member of our SDSU community — even indirectly — benefits from Day’s lasting legacy," Clay said. "I will miss him."

J.D. Wicker, SDSU’s athletic director, said: “I was saddened to hear of the passing of former SDSU President Thomas Day. Although I did not have the pleasure of working with President Day, he was instrumental in the development and advancement of the athletic department, including the visioning through initial construction of Viejas Arena, during his nearly two decades of leadership at SDSU. On behalf of the entire Aztec athletics community, I share our condolences to his family.”

Day was born in New York City on March 7, 1932. He was an avid reader as a youth, and his infatuation with science fiction and his older brother’s stories about engineering work on railroad bridges and tunnels sparked Day’s interest in mathematics and science. After Day took a calculus class in his freshman high school year, he went on to teach himself geometry, topology and, finally, physics.

Over his lifetime, Day received numerous awards for academic achievement, distinguished public service and outstanding contributions to the field of science, including being named a fellow of the American Physical Society. Day was appointed as a member of the National Science Board from 1984 to 1996 by both President Ronald Reagan and President George H. Bush. Day served as a vice chairman of the board, which sets policy for the National Science Foundation, from 1990 to 1994. He was also a senior fellow of the California Council on Science and Technology and a former board member.

Day graduated from the University of Notre Dame with a bachelor’s degree in physics in 1952 and completed a doctorate in physics from Cornell University in 1957. Later, he began working at the University of Maryland in College Park, first as a research assistant and later as a professor in the physics department, specializing in theoretical and experimental physics. In 1970, Day became the vice chancellor for academic planning and policy at the College Park campus. Eventually, he was appointed the vice chancellor for academic affairs at the Baltimore campus.

Day’s oral history is archived on the SDSU Library site.

A private family service is planned. In lieu of flowers, donations can be made to the Endowment To Fund The Thomas B. Day Awards For Excellence In Physics, prestigious annual awards that will recognize outstanding Department of Physics faculty members who have provided excellence in teaching. The awards will also recognize outstanding undergraduate and graduate physics majors who have shown excellence in the pursuit of their degree.