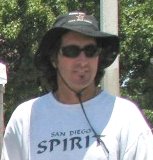 Parents, teachers and coaches teamed up to host a fundraiser for Hawver shortly after his diagnosis in December 2008. The event brought together local youth soccer teams, alumni games, allstars from the ‘70s-‘90s, old timers, and San Diego men’s outdoor teams.

“It was a very moving yet overwhelming feeling,” Hawver told East County Magazine at that time. “It’s just amazing.”

Hawver coached for two decades, serving as director of San Diego Spirit Soccer Club as well as 11 years as Grossmotn College women’s soccer coach and eight years as varsity coach at Patrick Henry, where he was an All-Pacific Coast conference player and team captain. In 2004, he was named Pacific Coach Conference Coach of the year. His achievements include four Pacific Coast Conference titles, six Eastern League titles, USYSA West Region finalist, three National State Cup finalists, and one National State Cup championship. Most importantly for the girls he coached, Hawver helped over 60 players move on to four-year university teams.

Born in Wurzburg, West Germany on Nov. 10, 1961, Hawver is a graduate of Helix High School. He met his future wife, Lianne Demetrio, after she read an online ad that he posted. They dated for three years and married December 27, 2008, shortly after he was diagnosed with ALS. Lianne Hawver, who has a nursing background, recalls her husband as a very affectionate, loving, considerate man” with “the best sense of humor,” according to the San Diego Union-Tribune.

John Neill, a Grossmont High School history teacher and parent of two former students coached by Hawver, has praised Hawver as “not only a man who has had great impact on soccer in general in San Diego, but also in the lives of my daughters and thousands of other young ladies who have played soccer.”

Kevin Frieberg, vice president of the San Diego Spirit Soccer Club, recalled Hawver as “passionate about winning, but even more passionate about developing players. Anyone who spent time with Howie in the last two years knows that he was also a true inspiration…Howie battled his disease with courage and dignity.”