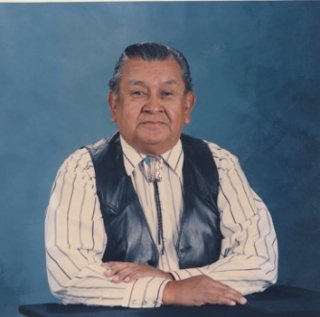 March 20, 2019 (Viejas Reservation) -- Tom Hyde, revered tribal elder, passed from this earth and his beloved Viejas community, March 14, 2019, at 92 years of age.  He is survived by a large family of 200, both blood and chosen.  Born Thomas James Hyde to Prudencia and Valentine Hyde, of El Capitan Village, he’s the last of the original Viejas Reservation members, and last to have personally witnessed destruction of El Capitan Village, at age five. Thus, he began life as a bridge between the past and future of the Viejas Band of Kumeyaay Indians.

He often spoke of the flooding of his family’s village to make way for the City of San Diego’s El Capitan reservoir, remembering how people, now homeless, were forced to dig up their cemetery and place loved ones in cans, until land for a new (Viejas) reservation, and cemetery was created on the Baron Long Ranch, in Alpine, Ca.

The Kumeyaay “Trail of Tears, was the way he described the trauma of being evicted and moved to new land, without homes, water or food, and the untimely deaths of many. The demolition of a village protected within the larger El Capitan Grande Reservation, was fought by his elders as an illegal act of confiscation in violation of federal law that deeded the land to the tribal villagers.  The Indians lost, and for Tom, it fueled a life-long mission, which was to make the tribe strong and independent enough to protect it from future confiscation of reservation homelands.

This, like other circumstances of his life, the impact of the great depression, serving in the US Navy, and struggling to overcome poverty that stalked the reservation, shaped a life of service, as tribal leader, entrepreneur, visionary mentor, and adoptive parent to many. A cowboy at heart, he also raised cattle and horses. Cattle being the first commercial resort of the Viejas Band.

According to grandson John Christman, Viejas Tribal Chairman, “Ranching was an entire culture, a demanding way of life, and his favorite past time. Tom loved animals and had a natural instinct for handling them.  At the same time, he always taught us that, ‘they aren’t your cousins,’ and to respect their wild and unpredictable behavior. He was a great teacher, sometimes an impatient one, he wanted solutions and answers.  Tom believed a person was judged on actions, and sacrificing for others, not words.

“Hard work, wasting nothing, respect, education, and discipline were all part of his moral code.  In members of his family and children he fostered, he installed a strict work ethic, beginning at 3:30 am for him, and 5 am, for the rest of us.  He had high expectations for everyone whose lives he touched. You might say, he was constantly grooming us to care for the tribe and become self-sufficient,” stated Christman.

A source of vast tribal cultural, and historical lore, Tom served on the Viejas tribal council as chairman, vice chairman and council member for 50 years -- a record still unbroken. “Uncle Tom inspired the tribe’s entrepreneurial spirit, personally through his   own businesses, from ranching and drywall company, to developing the tribe’s commercial enterprises,” said Anthony R. Pico, former Viejas Chairman. “He gave us belief in our ability to engage in business to provide for the people, beginning with the establishment of Ma Tar Awa RV Park, which he managed for 30 years.  He said, ‘he didn’t expect to make a fortune with park rentals, but hoped they would earn enough money to provide fuel to heat tribal homes.’

“Even the idea of creating a tribal business, or succeeding in any commercial activity, took a rare act of courage and initiative at that time on the reservation.  So many had been beaten down by poverty and traumatized by our history, that Tom’s confidence and risk taking, as well as determination to plan for and achieve the goal of an economic base, was a beacon of light in what was often a dark and depressed place. Tom was a living example of the resilience of our ancestors -- a cherished institution. He was our champion.  Under a tough exterior, his actions betrayed a man of great passion, generosity, and unconquerable belief in a better future for our people. He was always a challenge and challenging.  In politics, I compare his skills to a man playing chess, while everyone else is playing checkers.

“In addition to Ma Tar Awa RV Park, he was influential in creating every economic enterprise that followed from gaming, to banking, and a shopping center.

Tom passed along a tradition and expectation of earning one’s way, while at the same time, setting a personal example of caring, taking in, and mentoring tribal children in need of a stable homelife, including myself.  Tom saved my life, giving me purpose and an example of how to live.  There were many children in his home, yet there was always plenty of laughter, food on the table and clothes on our backs. I remember seeing him come home after work, almost unable to walk the pain was so bad -- the result of loading drywall from railroad cars to his truck. He suffered, but kept it to himself. In those days there were no hydraulic lifts, and it was literally back breaking work.

“He was a master of observation and interpreting non-verbal communication, especially reading people. It was uncanny and prophetic at times.  A lost art, I believe, all of our ancestors once possessed,” added Pico.

Always up for a new challenge, Tom founded and a served as council member of the Indian Health Council, serving Kumeyaay tribes in East County, and was also one of the first American Indians to serve as a director on a bank board.

“When I was chairman, Tom always had my back and was the go-to-guy to solve problems.  His leadership and humanity will be missed. But he will not be forgotten, he’s the stuff of legends, and the stories and lessons of his life will grow richer with each individual’s telling and retelling.  For those, who owe him so much, and love him so dearly, continuing the struggle for the life ‘Uncle Tom’ wanted for the people of Viejas, will keep him alive forever,” added Pico

Rosaries will be held Thursday, March 21, at the Queen of Angels, Catholic Church in Alpine, Ca, at 7 pm; and March 23, at the Nativity of the Blessed Mary Chapel on the Viejas Reservation, at 9 am. A requiem mass will follow at 10 am.