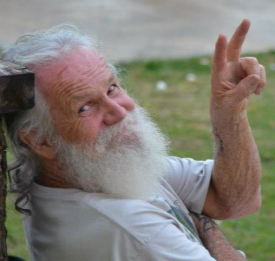 November 29,  2016 (Ramona)—The motorcyclist killed Friday morning on Highway 79 in Santa Ysabel in a collision with a Prius has been identified as Victor Earhart,  70, a prominent skateboarder who inspired fans of all ages.

Sector 9, a skateboard company where Earhart worked and performed as a team writer,  posted a  tribute titled “Legends Never Die” that praised him as “a great ambassador for skateboarding and a legend to many. He was always down to ride skateboards rain or shine, dirt or asphalt. He was very loved by all and will be sorely missed in the skateboard community.”

In an  April 2010 video,  Earhart is shown skating down a wooded trail, his dog trotting behind him.  In the video, he says he began skating in 1954, as a young boy. “My life has been downhill ever since,” he jested.

Skatehouse Media posted a video of  Earthart in the 2014 Guajataka Downhill in Puerto Rico,  where he did “hot laps” at the request of the local mayor as a crowd cheered him on.

Another video titled “Victor Earhart Finds a New Hill” includes this fitting summation:  “Age is only a number, fear is only relative. Victor Earhart is a shining example of living life to the fullest and neither age nor fear will stop him.”

Dirt bikes, mountain bikes, and skateboards. If you don't fall or crash you're doing it wrong. My first skateboard was made from steel skate wheels and a board I found in the garage. Later on I spent many dollars at South Bay Surf and Skate buying boards, trucks, wheels, and bearings for me and my sons.
http://sbsurfnskate.blogspot.com/