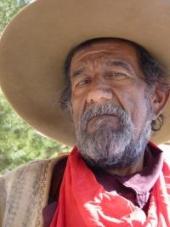 September 1, 2019 (San Diego’s East County) – Epiphany “Epie” Lopez of Potrero, best known for his portrayal of bandito Cruz Lopez in the Gaskill Brothers Gunfighters, passed away on August 22, 2019 at age 71.

Born January 8, 1948, he was related to the Machados, one of the first families in Old Town, San Diego, though not to Cruz Lopez.  “My family has been in San Diego since 1769,” he once stated.

He joined the Campo Gunfighters, which later became the Gaskill Brothers Gunfighters, in 1982, helping to keep alive the history of the famous 1875 Campo gunfight.  (View video)

He is survived by his wife, Lolie Lopez, who joined with Epie in reenacting skits from our region’s colorful past.

During the 2007 Harris wildfire, the Lopez family opened their own home as a soup kitchen, preparing food for their community.