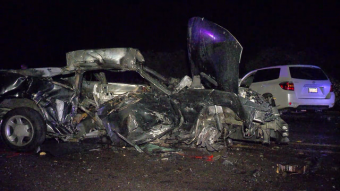 December 6, 2016 (Poway) — The driver of a black Ford Mustang made an illegal U-turn on State Route 67 near Iron Mountain Road and was struck by two northbound vehicles, a Ford Fusion and a Toyota Highlander,  yesterday at 5:24 p.m. , California Highway Patrol reports.  The Mustang caught fire and a passerby pulled the driver from the flaming vehicle.

The Mustang driver sustained serious injury and was air-lifted to Palomar Hospital in Escondido. Drivers of the other two vehicles were also transported to the hospital with minor injuries.

A separate, non-injury collision between two unrelated vehicles also occurred on the southbound side of the highway near the original collision.