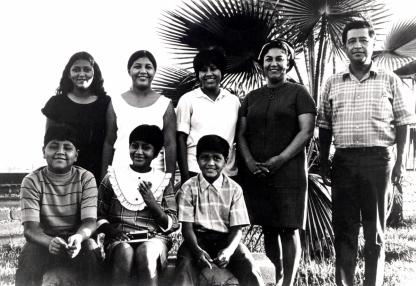 Photo:  Helen and Cesar Chavez with six of their eight children in 1969 at the United Farm Workers’ “Forty Acres” property outside Delano. Standing from left are: Anna, Eloise and Sylvia. Seated are from left Paul, Elizabeth and Anthony.

June 6, 2016 (Keene, Ca.) - Helen Fabela Chavez, 88, who played a vital role helping her husband give birth to what became the first enduring farm workers union in U.S. history—and sustained Cesar Chavez during the 31 years he led the United Farm Workers of America—passed away today, Monday, June 6 at a Bakersfield hospital surrounded by many of her seven surviving children, 31 grandchildren and 16 great-grandchildren.

Helen, a humble girl from Delano, used her fierce determination to help change the lives of thousands of farm workers and millions of others who were inspired by La Causa. Born Helen Fabela on Jan. 21, 1928 in the Imperial Valley town of Brawley, her family lived into a converted horse barn outside McFarland before moving to Delano. She met Cesar in the mid-1940s, they were married in 1948 after his discharge from the U.S. Navy and they had eight children: Fernando, Sylvia, Linda, Eloise, Anna, Paul, Elizabeth and Anthony.

Cesar and Helen left a comfortable middle class life in East Los Angeles in 1962 and moved back to Delano to begin organizing farm workers. Enduring greats hardship, Helen often had to raise the children by herself while Cesar was on the road. She returned to fieldwork while Cesar organized up and down California’s vast Central Valley; on weekends Cesar and some of the older children joined her.

Quiet and humble but fiercely determined and strong willed, Helen didn’t speak in public or talk with reporters, but she held deep convictions. In September 1965, while members of Cesar’s young Latino union debated whether or not to join a grape strike begun that month by members of a largely Filipino union, Helen in her quiet, no-nonsense way, settled the debate by asking, “Are we a union or not?”

Her consistent humility, selflessness, quiet heroism and fiery perseverance were at the heart of the movement she helped build.

Further background and details on plans for services will be issued Tuesday.