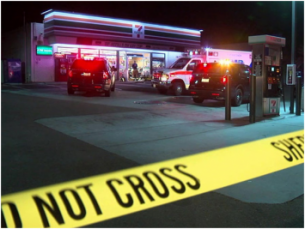 A Frito Lay delivery truck driver stabbed outside the 7-Eleven store on Avocado in unincorporated La Mesa shortly after 3 a.m. on November 7th has been identified as Dina Hammond, 35. She underwent surgery for multiple stab wounds in her upper torso.

A short time earlier, another woman whose identity has not bee released was stabbed outside the Grocery Outlet on North Second Street in El Cajon. She had reportedly been dumped out of a Mercedes Benz sedan and suffered massive blood loss.

When Sheriff’s deputies spotted a vehicle matching the description of the Mercedes that fled the scene, the driver refused to stop and led deputies on a pursuit through Jamul at speeds over 100 miles per hour. The abandoned, bloodied vehicle was found in the Dulzura area and an intensive manhunt ensued. The suspect was apprehended on a hillside near Highway 94 and Freezer Road by Border Patrol agents at 8:20 a.m.

Douglas was initially arrested for felony evasion of arrest and has since been charged with two counts of attempted murder. He is being held without bail.

The crime is being jointly investigated by the El Cajon Police and San Diego Sheriff’s departments.