“When the flag came down dozens of people volunteered to help catch and fold it. Some were moved to tears.” – Leonard Villareal, San Miguel Fire Department 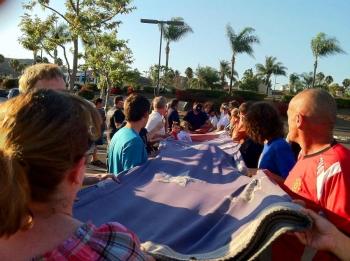 September 7, 2011 (Rancho San Diego)--On September 11, 2011 the 30 x 56 foot Patriot Flag will fly in New York as a tribute to the Armed Forces, first responders, second responders, families of the 9/11 victims and those who lost their lives in the worst terrorist attack ever on U.S. soil ten years ago.

Yesterday, the 75-pound flag flew over Rancho San Diego, ending a 223,000 mile trek across the United States. The Patriot Flag flew in 50 states in 50 weeks, and was displayed 225 times.

“Whether from the air or ground, the sight of this majestic flag will remind all of us what it means to be an American, and serve as an emotional focal point to remember those lost during the terrorist attacks,” San Miguel Fire Department public information officer Leonard Villareal said before the event. The flag was hoisted up by firefighter Mitch Mendler and proudly flown atop a San Miguel fire truck ladder, 100 feet in the air, at the Rancho San Diego Towne Center. 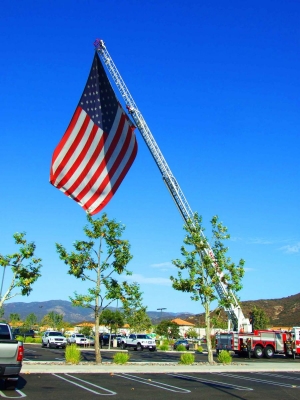 Afterwards, Villareal added, “When the flag came down, dozens of people volunteered o help catch and fold it. Some were moved to tears.”