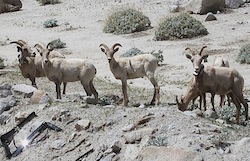 April 23, 2013 (San Diego’s East County) – The California Association of Environmental Professionals has awarded the Ocotillo Wind project with its highest award for Outstanding Environmental Analysis and Documentation at a joint conference of AEP and the National Association of Environmental Professionals (NAEP). The Builder, Pattern Energy, claims,  “The Ocotillo Wind project will provide enough clean and renewable energy to power nearly 125,000 homes in Southern California each year.”

Speaking as a non-scientist, the first thing that comes to mind when I hear the name Ocotillo is a stream of videos (click on this link to go to the Save Ocotillo index page) that stretches beyond the four months this project has been online and continues to document the scarcity of wind. Though not a “scientific study,” they never-the-less constitute a visual chronology that includes a great many details that would not otherwise be available to the public. One has to merely scan the titles to realize something is very wrong:

April 20: “No wind for over 4 hours so far, no power generation, the meter is running backwards”

Yet the opposite problem arose this month. Three of the videos depict dust clouds rising up from the projects access roads. As a recent update from the Desert Protective Council explains, “ On Monday April 8th, a strong northern California storm swept through the California desert without rain but with extraordinarily strong winds, gusting in Ocotillo and Borrego Springs up to 80 miles an hour. These winds blew all day and the dust storm in Ocotillo was legendary. As you may recall, Imperial County is an EPA- designated non-attainment air basin. The air in Imperial County has unacceptably high levels of particulate matter. A dust storm, like the one on Monday, carries tons of particulate matter across the desert and into the Imperial Valley cities, where the childhood asthma rate is 30% –one of the highest in the nation.” 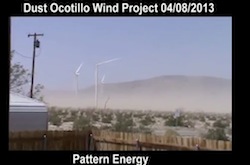 Image right:  Dust blown up from the Ocotillo Wind Project – Save Ocotillo

In his video from April 8, Jim Pelley claims that the local residents filed more than 100 complaints to the County Air Pollution during the construction phase of this project, but “the general response was everything was in compliance.”

“It did not matter what we said,” adds Miriam Raftery, the Editor of East County Magazine, told SDLG. Prior to Ocotillo, which she describes as an environmental nightmare, Raftery had believed in large wind projects.

Pelley, who films many of the Ocotillo videos from his his yard, says Pattern Energy ripped up over 465 acres of the desert surface to prepare for the Wind farm. That is why the dust is so overpowering. He claims that 99% of it comes from the project. (Ironically, the winds were so strong that the Wind Farm had to be shut down.)

It has been a year since ECM reported that a gag order was preventing State Park employees from revealing the harm that the then proposed Ocotillo Wind Farm would do to the Anza-Borrego Desert State Park. Their source was a retired Superintendent, Mark Jorgensen, who emailed ECM that the park’s staff had spent two months preparing a statement for the project’s Environmental Impact Report, detailing their concerns. When he asked why they did not file, “I was told that they had been ordered by the Governor’s Office to NOT comment. I was told this order came by phone and happened the day before comments to BLM were due.”

Only Jorgensen was not the only one to allege there had been a gag order. Terry Weiner, the Conservation coordinator for the Desert Protective Council, informed ECM that, “I talked to state park staff at party on Friday night and they are truly allowing themselves to be muzzled by the Governor’s office.” The Borrego Sun later published that several state park insiders confirmed that Jorgensen’s allegations were true.

“I resigned from Parks so I could be free to express my own opinions on a number of environmental issues including this one,” Jorgensen told ECM.  “The people who have given their careers over to working in Sate Parks, people who have decades of experience and expertise, are muzzled by the bureaucrats—in the quest to ‘fast-track’ these projects—in order for the BLM, the State of California, or the citizens to not be confused by the facts.”  The term fast-track, he added, “is a euphemism for circumventing environmental regulations and avoiding the facts.” 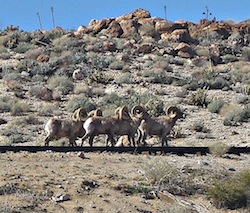 This would seem to be confirmed after East County Magazine provided photographic evidence that the endangered Peninsular Desert Bighorn Sheep occupied the Wind farm site, in April 2012. Though Pattern Energy insisted the animals were keeping to the rocky ground above, the pictures showed them on the flats. So the Fish and Wildlife Service ordered the “take” (death) of the 10 animals in the photographs. Jorgensen finds it astonishing that an agency “charged with protecting this endangered population,” would act in this manner.

They ignored Jorgensen’s request that the project be aborted or, failing that, 8 turbines be moved from the an area in close proximity to the lambing area. The boundaries of the Anza-Borrego Desert State Park, where the sheep were protected, have been reduced from 800,000 acres to around 370,000 acres. This decision benefitted  Pattern Energy and other developers who are moving into the area. Jorgensen claims the authorities are not protecting the sheep, only “the interests of Pattern Energy.”

Another environmental controversy arose after ECM zeroed in on the half hearted manner in which Pattern Energy appeared to be replanting desert vegetation. The differences are clearly visible in the Before and After pictures below.  The photographer, Parke Ewing, points out, “This is ridiculous…Many Ocotillos were planted only about eight inches deep with no root system, so in a slight wind they blew over.  Also note the broken stalks.  Most Ocotillos, if not all, are dead.” A spokesperson from Sempra Energy, the parent company of SDG&E, told ECM that the Ocotillo  was a “vertical mulch” that had been planted to serve as wind breaks. She claimed that there were replanted areas, but would not say where they were.

Image right:  Before and After Pictures of the Ocotillo Wind Project site. According to a spokesperson from Sempra Energy, the Ocotillo shown in the “sfter” picture were planted to serve as a wind break. A more thorough replanting of the desert supposedly took place somewhere else – Parke Ewing photo, courtesy East County Magazine

It appears that Pattern Energy may have  delayed acknowledging a resolution  the Southern California Tribal Chairman’s Association, which represents 19 Native American tribes, passed  in opposition to the Ocotillo wind Project. A tribal spokesmen emailed EM that,  “It’s interesting that they brought it up yesterday AFTER public comments were no longer allowed AND after the Planning Commission gave Pattern the advantage of speaking, unchallenged, at the end. Even after they were the only ones allowed to give an uninterrupted presentation to the Commission. This resolution makes it clear that Pattern is, once again, misrepresenting key facts. But then, that’s been their pattern (pun intended) all along.”

Today the California Native American Heritage Commission will hear local tribes’ allegations that the federal government failed to protect Native American cultural resources at the Ocotillo Express Wind Facility site. They claim that the entire site is a “santified cemetery,” of great significance to the Native people, and can justly point to 22 sacred sites recorded with the California Historical Resources Information System at San Diego State University.

Last February, the courts heard a lawyer representing three environmental groups argue that the Federal government is deliberately ignoring violations of state laws intended to protect raptors (birds of prey) and other wildlife at the Ocotillo Express Wind Facility.

After the case was dismissed, Terry Weiner, of the Desert Protective Council told ECM, “It is discouraging that our democratic system of checks and balances has broken down in relation to the administration’s determination to usurp our public lands for industrial energy development. If we can no longer count on the courts to force our federal agencies to adhere to their own laws, how are the American citizens supposed to protect our national natural and cultural heritage for future generations?”

The Desert Council has filed an appeal.

Meanwhile Pattern Energy’s news release quotes their CEO, Mike Garland, as saying “We are honored by the award, which underscores our commitment to environmental excellence. We are proud to implement the most advanced technologies available to avoid impacts on environmental resources. We are pleased with the current operation of the project, which is providing clean energy to Southern California, and we look forward to continuing the implementation of the project’s environmental commitments and community benefits program.”

Could it be the The California Association of Environmental Professionals have an agenda to promote these projects? No matter what?