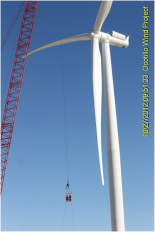 November 10, 2012 (Ocotillo) – North American Development Bank has announced that it has approved a 20-year, $110 million construction loan for completion of Pattern Energy’s Ocotillo Express wind energy facility.  The bank, which is capitalized by both  the U.S. and Mexican governments, funds projects within 62 miles of the international border.

SDG&E has signed a 20-year purchase agreement for power from the project, which is on track to become the first renewable energy project to tie into the Sunrise Powerlink, bringing electricity from Imperial Valley to San Diego.

The project has generated considerable controversy, resulting in numerous lawsuits filed by residents, environmentalist, and a Native American tribe seeking to halt the project due to damage to the environment and cultural resources, as well as its negative impacts on thet own of Ocotillo. One suit was dismissed for lack of standing; the rest have been consolidated under a single judge.

The project was approved through a new fast-track process on federal Bureau of Land Management public property. Pattern Energy has also sought to complete the project by year's end to qualify for federal wind production tax credits, since Congress has not renewed those credits, though a battle is brewing on capitol hill as the deadline approaches.