“What you do speaks so loudly that I cannot hear what you say.”

November 2, 2011 (La Mesa)--This is the final installment of ECM’s three- part series on the proposed Property-based Business Improvement District (PBID) for downtown La Mesa. As the process enters the voting stage, we review the changing expectations and remaining concerns among business and property owners in the district. For the background and readers’ comments see Part I http://www.eastcountymagazine.org/node/6980; the most contentious issues in the story are examined in Part II at http://www.eastcountymagazine.org/node/7105
“...All over but the voting” was the lead sentence in La Mesa Today’s recent report on the PBID Formation 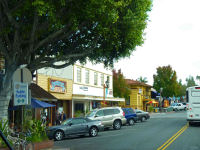 Question: Are PBID expectations converging?
Answer: Yes, but... Today, strong views range as widely as they did last January. If the balloting produces a green light, the PBID will become the unwilling recipient of a trunk full of civic baggage. Think of a wedding reception where one of the two families sits blinking in disbelief.
What will happen? No one knows. This is uncharted ground for La Mesa. Some see hardship, but few forecast ruin. Mercifully, the downtown question is not governed by absolutes. As several thoughtful citizens have observed, it is not “Gaslamp or die.”
Concerns that the PBID budget is too ambitious are connected to fears that funds collected for PBID budgets will only encourage irresponsible behavior – and/or the continued failure to adequately address painful fiscal questions, such as pension funding shortfalls – by the City Council and administration.
Harsher critics point out that La Mesa businesses have tightened belts and taken reduced pay to survive lean times. “And the City?” they ask. Some are incredulous that the City can’t find $300,000 to perform what are essential civic functions (security, maintenance and promotion).
Fortunately, La Mesa suffers only a pale echo of the blind negativity that drives our national paralysis. Yet, some anti-PBID partisans see no margin in compromise. For them, nothing good can happen during this administration’s tenure in City Hall. Period. They will criticize, oppose and obstruct everything – no matter the merits. There is no serious effort to understand, because there is no intention to participate. Their sole purpose is to ensure that city leaders get as little credit, and as much criticism, as possible.
Against that stream, the volunteers on the PBID Formation Committee have patiently rowed. They’ve done the work, crunched the numbers, trimmed the scope, and balanced competing objectives. And now there are signs that the current is turning in their favor.
Many once uncommitted business owners now say that the current PBID design is sufficiently timid to meet any prudent requirement for caution. Former skeptics see the annual assessments as a small price for an updated downtown that attracts new visitors and shoppers. The fog of disinformation about a backdoor tax increase with zero benefits is gradually being discredited.
PBID advocates ask us to imagine the combined effect of the planned Streetscape improvements, the Village Merchants Association’s signature events and various Chamber of Commerce activities, with PBID-funded promotion, maintenance and hospitality services. The enabling impact of a predictable and non-voluntary funding stream would be significant. It’s not hard to see the point.
When queried, many La Mesans (on the Boulevard and in the hills) agree. The Village would benefit from a facelift and better overall marketing, in addition to current event-specific efforts. But they are unsure just how a PBID would get those things done. So much depends on execution. And long memories keep trust levels low.
So we return to a question Mr. Maxwell posed last September while writing of the town’s unique architectural and social make-up. “But what will we do with it?” he asked. Petitions and ballots will settle the PBID’s future, but that vexing question will still hang over the Village. Once everyone’s had a say, what will we do?
This concludes the series, but it hardly closes the subject. La Mesa sits astride the main arteries between San Diego and East County. The outcome here matters. Join the conversation, check out that new website and share your thoughts with the community. Everyone in La Mesa has a stake in this.