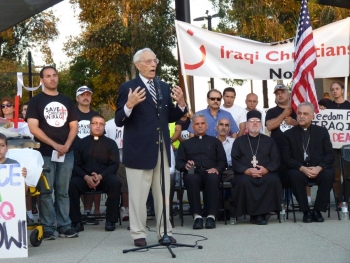 Former State Senator Wadie Deddeh (photo, right), the first Iraqi-American elected to public office,  urged the Obama administration to take action now to save 400,000 Christians. “With your prayers, I hope and pray that someday, someday we will be gathered here to welcome those brothers and sisters.” View a video clip: http://youtu.be/GHY5F0Mk9eA

Mark Arabo, a national leader of Iraqi Christians, thanked the crowd for “standing shoulder to shoulder” and helping with letters, calls, tweets and shares on social media to get a measure passed by the House urging the President to protect Christians and other minorities, including Yezidis trapped on a mountain without food or water,  in Iraq.  Soon after the President launched air strikes against ISIS terrorist forces (now calling themselves the Islamic State) and launched humanitarian aid drops in Iraq.  View a video clip: http://youtu.be/_E1FkkF5ues

“This journey started nine weeks ago,” said Arabo,  of “a hope that started here, a hope that will never die.”

Arabo has lobbied members of Congress, the State Department and the White House in efforts that have succeeded in drawing global attention to the plight of Iraq’s persecuted people.   Last week, he traveled to the United Nations with religious leaders and won passage of a resolution to impose sanctions on any member nation that supports ISIS. 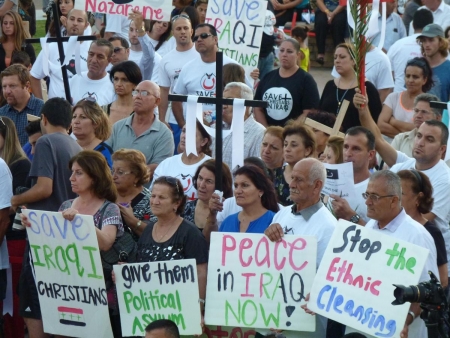 “We were able to get the United Nations to send $600 million in humanitarian aid,” he further announced, drawing cheers from the crowd. In addition, he announced, France, Australia and Sweden have agreed to “open their doors” and offer asylum to persecuted refugees.

He said this is a “defining moment” for the community and the world.

“The world community needs to act, and we will not stop our journey until we save every single person who is stranded in Iraq….We need to offer them a home.”  He added that the bloodshed needs to stop, and that his coalition is talking to representatives of many nations seeking help.

He closed by urging people to spread the word and speak out by calling members of Congress and the United Nations. “But we are nothing without our community, without our support.  You are what drives us, every single day.”