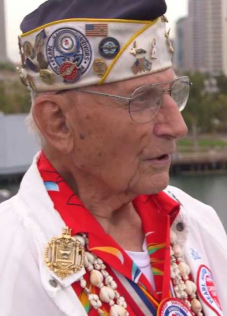 November 21, 2016 (Casa de Oro) -- Pearl Harbor Day is coming up on December 7th, a day to recall the worst attack on U.S. soil when the Japanese air force bombed an American air base in Hawaii during World War II.

There are very few survivors of Pearl Harbor left to tell their tales. But on Saturday, November 26th at 10 a.m., Pearl Harbor survivor Stuart Hedley, a Navy veteran, will give a presentation at the Casa de Oro Library in Spring Valley (9805 Campo Rd., #180).   Hedley was aboard a U.S. ship that was bombed and will share harrowing tales of survival and heroism.

The Spring Valley Lions Club, co-sponsor of the event along with Friends of the Casa de Oro Library, will also be collecting donations of used eyeglasses and hearing aids to help people in need.