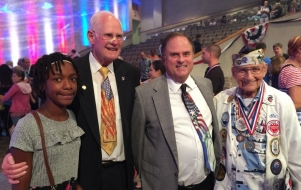 By Jesse B. Kendrick 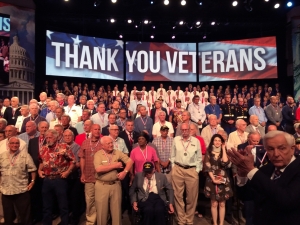 Following impressive performances of iconic American songs, veterans were asked to come forward to receive recognition for their service. El Cajon Mayor Pro Tem Gary Kendrick was among the local dignitaries awarding medals to past and present service members.

“It was a truly humbling experience to celebrate those who have sacrificed so much for our freedom,” said Kendrick. “Through tears, one man told me that no one had ever thanked him for his service.  I am honored for the privilege to be among the thousands   showing our gratitude this weekend.”

Among those honored was San Diego resident and Pearl Harbor survivor Stu Hedley. Now 96, Hedley joined the United States Navy when he was 18. He recounted a gripping tale of his close encounters with enemy firepower during the fateful 1941 attack.

“I saw the [U.S.S.] Arizona explode through my periscope!” he recalled. After serving in the Pacific Theater of the Second World War, Hedley continued his military career in the Korean Conflict. “I spent 20 years and 9 days in the Navy. I never got a scratch, never got a burn, never got a bruise. I went through some harrowing experiences. The Lord Jesus Christ protected me.”

Despite his long career of service, Stu Hedley remains both optimistic and humble. “I am not a hero. The heroes are those who gave the ultimate price to give me the freedom to sit at my desk right now.”

for their service to our country. Thanks,  Jesse, for the heartwarming article.

Why wasn't it held in downtown El Cajon where the general public could attend? I for one, had no idea this was happening. Would have been nice to go, as an honor to my dad who fought bravely in WW11