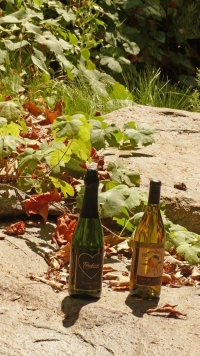 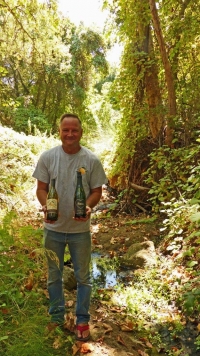 September 3, 2019 (El Cajon) -- What could be more heavenly than wine made from wildflower honey, orange zest, cane sugar and vanilla?  How about this news: the creators of honey-wines known as “Saccharo” have moved their Pearson Brothers Winery back to its roots, returning to East County.

They now have a new tasting patio in a wildlife sanctuary open as of Sept. 21, as well as a wine club, and recipes for cocktails featuring their sustainably-produced Saccharo honey wines in several new varieties. 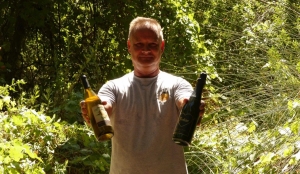 “We are truly the most sustainable wine in the world right now,” says Dale Pearson, who started the business a few years ago in a rural area of unincorporated El Cajon along with his brother, Mike. “In regular wineries, the business model is to kill everything and take it down to the ground.  In Napa and Paso Robles, some wineries are cutting down oak trees and causing watershed depletion.”

In 2015, Reuters international news service reported on “water wars” in California’s coastal wine region. KCBX reported in 2016 on a winery that cleared thousands of oaks in San Luis Obispo.  Napa is running out of land, according to the San Francisco Chronicle, and California leads the west in habitat destruction, KCET reports.

Fortunately, no trees are killed and no groundwater is depleted for production of Pearson Brothers products – and their property is a thriving wildlife habitat sanctuary.

That’s because their flavorful white wines are made – astoundingly – without grapes, using science to replicate the taste with other ingredients found in nature. The Pearson brothers measured grape juice with scientific instruments to determine the PH levels and levels of sugar, PH, water and nutrients.  The result is white “wines” made without grapes. (In the U.S., anything fermented can be labeled wine, hence the sale of passionfruit and apple wines elsewhere, to cite other examples). 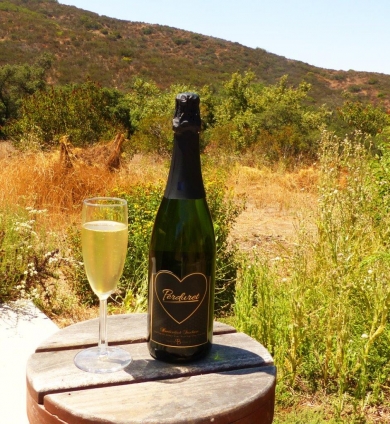 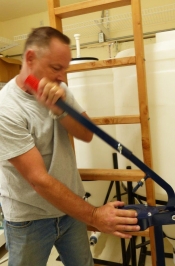 The sparkling champagne-like Perduret with heart label has a pleasing taste – not too sweet and not too dry – with fine bubbles and a rich, golden hue.  It’s hand-crafted in a laborious process that includes chilling the bottles and hand-pressing each champagne cork.

The winery is located on 63 acres of the  Rancho Agua Dulce nature preserve, named after the North fork of the Sweetwater river that originates in the reserve.  Agua Dulce means sweet water in Spanish. 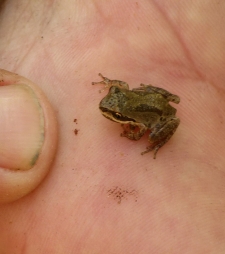 Leading me on a hike down to a shaded creek bed,  Pearson says, “This is an ancient habitat. We have a herd of deer, bobcats, raccoons, coyotes, mountain lions, opossums, horned owls, barn owl, falcons and red-tailed.

“It’s an entire full ecosystem – everything from wildflowers to little tree frogs.”  There are also wild grapevines growing which are not harvested, merely kept as part of the natural habitat. No pesticides or herbicides are used on the property, keeping it sustainable.

A new tasting room overlooks the wildlife preserve from an outdoor deck complete with telescope for guests to enjoy views. 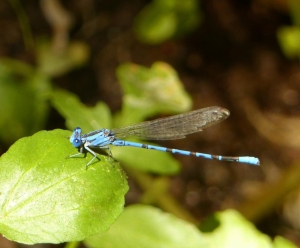 So why did the Pearson brothers return to East County, after briefly moving production to Imperial Valley?

The move to the desert area was prompted by high fees San Diego County wanted to impose when the Pearsons sought to boost production from 60 to 2,000 cases after landing a major distributor, Bronco Wine Company. Bronco’s California distributor, Classic Wines of California, distributes Pearson Brothers products. 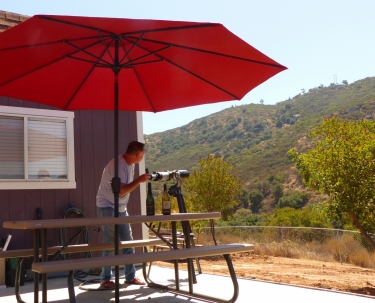 "They realized we invented a new kind of wine,” Pearson says of Bronco.

But a major deal for their white ginseng energizing drink fell through due to rules on ginseng. “In China you can plant American White Ginseng seeds and cultivate and sell them,” Pearson explains. “But if you try to export the same exact ginseng but grown in the U.S.A., it’s considered a drug. Special measures must be taken that are extremely expensive to allow it in China.”

The Pearson brothers are accustomed to taking risks-and overcoming challenges. Dale is a retired underwater photographer who has worked for National Geographic and Jacque Cousteau, wrestling giant squids and taking videos of sharks at close range. Mike has worked as a flight nurse on a medical helicopter.

Next up, their aim is to focus on marketing and build up retail locations to grow their brand. 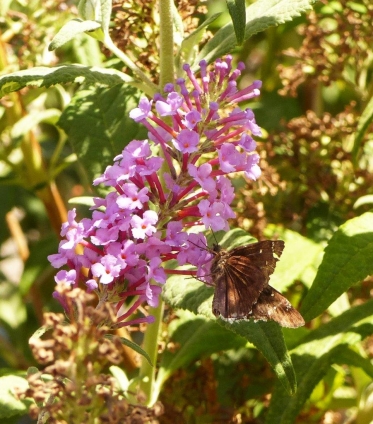 “Not enough people knew about us,” says Pearson, but that’s changing.

Their wines are now sold in 11 retail locations such as Baron’s in Alpine (see website for the full list).  They’ve got a radio advertising campaign planned and more.

One of the new marketing tactics is a collection of cocktail recipes crafted with Saccharo, which you can find on the Pearson Brothers Winery website. Options include a Mule, Pineapple Mojito, Valley Mule,  Island Breeze, Margarita, Pina Colada, Island Ice Tea, Bloody Mary, and Strawberry Shortcake. 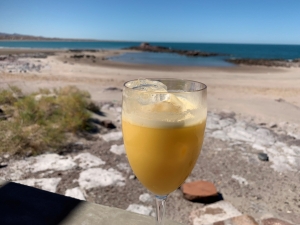 Dale Pearson mixed up his latest favorite concoction for me to sample – a refreshing beverage made with three shots of Saccharo, two shots of orange juice and one shot of real cream of coconut. He puts it in a shaker to blend it, then pours it over ice. It tastes rich and velvety, reminiscent of Creamsicle Pops.

“This on ice is the best summertime drink.” Pearson declares, adding that he sold 700 of these drinks at a Long Beach seafood festival. Each of the cocktails has about 6 percent alcohol, less than a glass of wine and about the same as a good beer, he notes. They have citrus and vitamin C, providing hydration as well as flavor and yes, a buzz that’s not just from the bees.

They’ve also started a wine club. Members get t-shirts and 10 percent of a case of wine every three months. A case runs $156 retail, $141 for wine club members. Cheers!

To visit their new tasting room, order wine or learn more, check their website at https://www.PearsonBrosWinery.com.