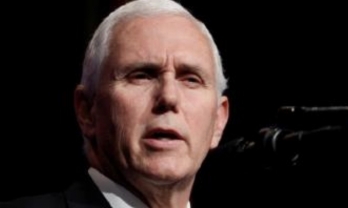 “Now that Roe v. Wade has been consigned to the ash heap of history,” said Pence, “we must not rest and must not relent until the sanctity of life is restored to the center of American law in every state in the land.”

Senate leader Mitch McConnell, a Republican, told USA Today in May that a Congressional bill to ban abortion nationwide would be “possible” after a leaked Supreme Court decision indicated the high court was poised to end abortion rights and allow states to ban or restrict abortions.

The stakes are high for women in the upcoming November election and the 2024 presidential election, since Republican leaders have pledged to seek a federal ban on abortion if they regain control of the House, Senate and Presidency.

By contrast, Democrats in the House of Representatives have passed a bill that would restore and protect abortion rights nationwide, but lack enough votes in the Senate due to Republican opposition. President Joe Biden, though Catholic, has pledged support for keeping abortion legal.

While conservatives have hailed victory and seek to outlaw abortion even in liberal states like California where elected officials have pledged to support abortion access, sentiments to ban abortions completely, even when a woman’s life is in danger or she’s been raped, are opposed by most people in the U.S.

A new poll NPR/PBS New Hour/Maris poll shows that Most Americans, 56%, oppose the Supreme Court’s ruling and only 40% support it. That’s consistent with many past national polls showing the majority of Americans want abortion to remain legal.

Only 39% of those in the new poll voiced confidence in the Supreme Court, an all-time low, and 56% fear the court will next seek to outlaw birth control and gay rights, as Justice Clarence Thomas openly stated is his goal in his written opinion.

Around 30 states have already taken action to ban or severely restrict abortion; Congressional action could expand that to all 50 states or conversely, restore access, putting women’s lives and those of the unborn at the whims of each session of Congress.

Among San Diego County’s Congressional representatives, only Republican Darrell Issa has praised the Supreme Court’s decision, after earlier signing an amicus brief urging the Supreme Court justices to overturn Roe vs. Wade, the landmark ruling that legalized abortion access nationwide a half century ago.

the retrumplicans have opened the door to chip away at your rights. what is next only time will tell. unless you vote the bums out!!