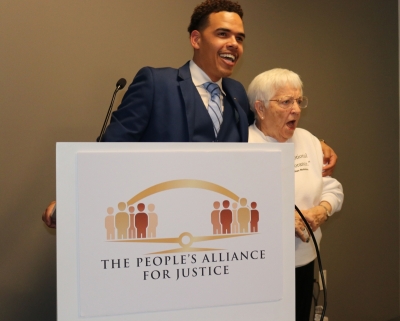 By Angela de Joseph
March 19, 2019 (San Diego) -- Reverend Shane Harris is one of the few people who could put out a call on a Monday and get a hundred people to show up to downtown San Diego on Saturday morning to hear a talk about racism.  Harris, the former president of the San Diego chapter of the National Action Network (NAN) recently launched his own national civil rights organization, The People’s Alliance for Justice. 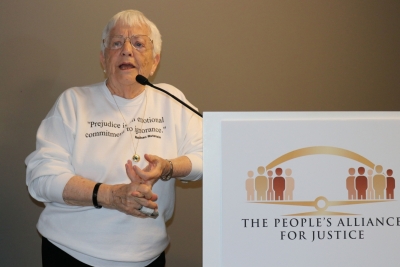 The People’s Alliance for Justice held a brunch-reception at the San Diego Union-Tribune’s 12th floor meeting room as an olive branch to the community after the paper’s editorial cartoon debacle last month. (The controversial Juxtaposed revered authors James Baldwin and Toni Morrison with actor Jussie Smollett, who has been indicted on 16 criminal charges).
The keynote speaker was renowned anti-racism activist and educator Jane Elliot, famous for her "Blue eyes–Brown eyes" exercise which she first conducted for her elementary school students the day after Martin Luther King, Jr. was assassinated. She was further catapulted into the national spotlight by her appearance on the Oprah Winfrey show over two decades ago and most recently as a guest on “Red Table Talk” hosted by Jada Pinkett-Smith on Facebook. 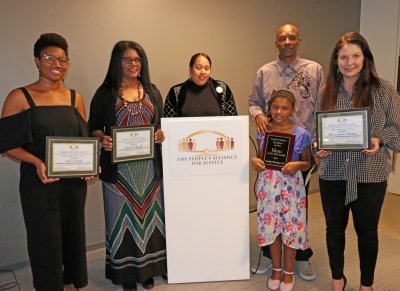 Reverend Harris named The Women’s History Month reception in honor of legendary singer Mahalia Jackson, a staunch supporter of Dr. Martin Luther King, Jr.  Jackson famously stood near the stage at the foot of the Lincoln Memorial at the 1963 March on Washington and said, "Tell them about the dream, Martin!" prompting him to make the iconic “I Have a Dream” speech.
The standing-room only event celebrated Women’s History Month by honoring four San Diego women for “taking on the fight for justice and equality.” The honorees were Marlea Dell’Anno, civil rights attorney; Tinicia Smith, co-founder and president of Black San Diego; Angela De Joseph, founder of Women of Color Roar Media; and 9-year-old Malaiha Cole, who called 911 from the backseat of her father’s stolen car, saving herself and her three-year old brother from the clutches of a kidnapper. 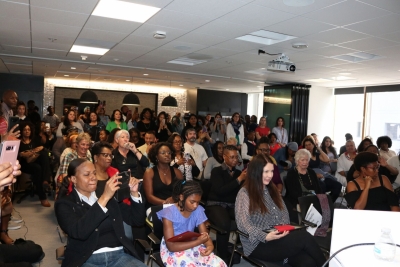 The predominately young and African American crowd spilled out of the overbooked room into the hallway.  Although seating was scarce and the temperature elevated, the mood was jovial as people leaned against walls and sat cross-legged on the floor. A few parents brought their children, including Union-Tribune editor and publisher, Jeff Light, who brought his daughter to hear the brilliant and often controversial words from Jane Elliot. And the 85-year-old firebrand did not disappoint.
Elliot, a petite gray-haired woman, entered the room wearing her trademark white sweatshirt that says, “Prejudice is an emotional commitment to ignorance.” She took hold of the microphone and did not let go or let Reverend Harris get a word in until she was done.
Elliot’s style is confrontational and designed to “shock and awe.” She asked for anyone who was bi-racial to stand, then chastised them because, “There is only one race, the human race.”  Some of her talk is fact-based.  For instance, the size of the continents shown in many maps and on globes were drawn to make European countries larger and the continent of Africa smaller.  Then there were some “Elliotized” tangents she went on such as that Adam and Eve were a mixed raced couple and white people are faded black people, ideas played well with this audience but may have some push back in other circles. 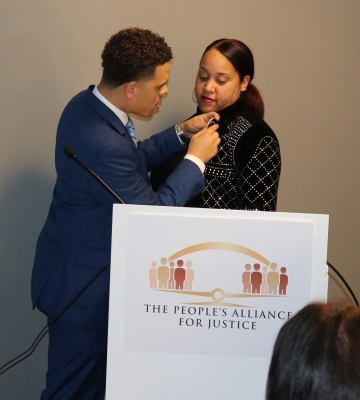 In all, Jane Elliot remains a unique and powerful educator.  She is riveting and magnetic in her delivery of her most important message: racism is taught.  Although everyone may not want to believe that we are “all cousins," we did all agree to treat each other the way we want to be treated. It is a simple concept, but one that would have a tremendous impact on our communities and the world, if we practiced it.
The Mahalia Jackson Women’s History Month event ended with Elliot relinquishing the microphone and Reverend Shane Harris pinning the new San Diego president of The People’s Alliance for Justice, Tonja Daniels.