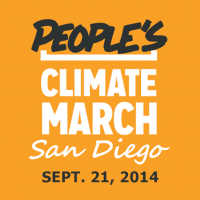 September 9, 2014 (San Diego) – “You are invited to a pivotal moment in the history of our planet. In New York and in major cities around the world, people will be uniting on September 21 to call on world leaders meeting at the United Nations Climate Summit to act NOW on climate change,” says Diane Lesher, an organizer with a local coalition hosting a People’ Climate March San Diego to support the New York and global events and to focus on solutions to climate change that can be implemented locally.  Lesher adds, “Together we will call for a rapid transition from fossil fuels to renewables and energy efficiency, and a just and sustainable economy.”

The People’s Climate March San Diego will gather on September 21st at City Hall (202 C Street)  at 12:30 to call for a strong climate action plan for San Diego, stop at American Plaza / Santa Fe Station to highlight transportation alternatives, and end at the County Administration Waterfront Park, For a rally with local leaders representing different communities on developing sustainable policies and supporting green jobs and clean energy. There will also be music and fun activities ending around 3:30 to 4 p.m. Confirmed speakers include Todd Gloria, San Diego City Council President, and Richard Barrera with the San Diego-Imperial Counties Labor Council.

“In order to make this event as big as possible, we’ll need all hands on deck,” Lesher says. Participants are asked to sign up at the group’s website: www.peoplesclimatesd.org or on their Facebook page: https://www.facebook.com/events/693486614073088/.

Hopefully they will not get rained out?