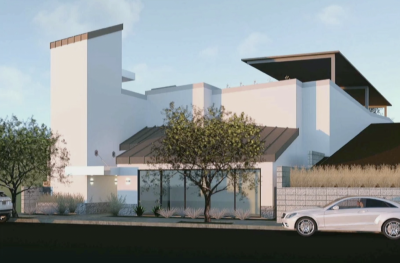 February 11, 2022 (La Mesa) — Phil Rath could see the light at the end of the tunnel. He had the La Mesa Planning Commission’s stamp of approval, as well as the Design Review Board’s. It appeared that his employer, Urbn Leaf, would soon have a new cannabis dispensary at 7901 Hillside Drive.

Yet in order to turn this project into reality, Rath still needed the La Mesa City Council’s majority vote on a permit — a vote that he did not receive after the two-hour public hearing on Tuesday night came to a close. The final three-two vote upheld the appeal, and effectively extinguished the proposal.

Since 2016, adult-use and medical marijuana businesses are authorized via La Mesa’s Measure U, a voter-backed change that opened the door for the cannabis industry to grow in La Mesa. The impact on La Mesa over the past five years has some concerned about the City’s status as a “drug destination.” 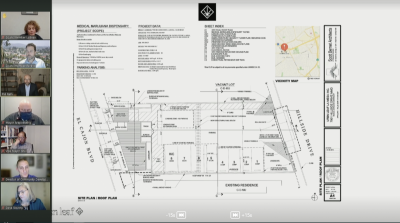 The appeal against the project was brought to the City Council by Dana Stevens, Executive Director of the Community Action Service Advocacy group (CASA). Citing the concentration of dispensaries in La Mesa at one per 3,398 residents, with 17 shops currently operating, Stevens and the many CASA and community members who joined the virtual hearing decried the proposal of another dispensary.

“The City has provided no evidence that any economic benefit has ever been provided to the areas where marijuana is sold,” explained Stevens during her presentation.

Other reasons for the opposition included concerns about the armed guard who would be present, the increased traffic hazard on narrow Hillside Drive, the close proximity to Cookies — a different dispensary — and the overall health of La Mesans.

Above all, though, CASA opposed this project because of its location on the borderline of commercial-residential zoning lines. 7901 Hillside Drive is a single-family home; the Urbn Leaf shop would have remodeled the property, converting it into a commercial business. If the project were approved, many feared similar encroachment all over the City could follow because of the precedent set.

“The reason this property is zoned commercial is because one end of it is positioned on El Cajon Boulevard,” said Jean Duffy during the public comment. “However, the entrance would not be located on the commercial end. So the storefront will actually be in a neighborhood.”

Others agreed with Duffy’s point. “In principle, I don’t have a problem with medical marijuana dispensaries,” said Nick del Pago, who grew up just five doors down from the proposed entrance on Hillside Drive. “What I do have a problem with is changing the composition of our neighborhoods.”

“It is not in our interest to have a disruption in communities,” countered Rath later on, aiming to defend marijuana businesses. “We’re simply asking that we be treated the same. We’re not trying to connive our way into anything. These rules and methodologies are closely watched…and the minutia of how these decisions get made really matter.”

When it came down to making the decision, Councilmember Bill Baber asked everyone to hone in on the consequential elements of the appeal. Besides the traffic levels and a debate over an emergency door onto El Cajon Boulevard, the pivotal issue to discuss was the path of travel between the existing Cookies dispensary and the proposed Urbn Leaf project.

Phil Rath and city planners had drawn a meandering line between the two points that cleared the 1,000 foot minimum distance required. But Stevens had argued that this drawing purposefully avoided recognizing a well-traveled pedestrian pathway that connects the two land plots, making the distance between them just over 200 feet.

According to the City’s renderings, this walkway is just a “goat path” and not part of an official path of travel. Yet many residents spoke of their daily, legal use of the pathway.

"It’s clear, in this case, that this is a gerrymandering of the rule about 1,000 foot distance between dispensaries,” said Craig Reed, a steering committee member for Envision La Mesa.

“We’re trying to figure out how to deal with a large company who’s working every angle,” pointed out del Pago. “They’ve had to take every effort to find all the little things.”

However, not everyone in attendance was opposed to the project. “I live near a few dispensaries and I have found them overall to be good neighbors,” said Dawn Tol.

Tol also pointed out the potential biases against marijuana users at hand in the hearing. “Worrying about the types of people who make those purchases,” she said, “is playing around with old tropes and stereotypes that further stigmatize cannabis use.”

The Councilmembers heard from both Rath and Stevens once more, and then deliberated.

When Vice Mayor Jack Shu made a motion to vote in support of the appeal and against the project, he emphasized the basis of his “aye” vote on the poor location and roundabout path of travel.

“It is too creative, at best,” he asserted. “For that reason alone, I think this site is too close to another site.”

“You can’t change the game at the end,” rebuked Councilmember Bill Baber amicably. He noted that the City Council has used this method of path of travel analysis for other projects, which is different than as the crow flies.

In fact, the agenda item directly before the appeal hearing relied on the same method to pass an ordinance on Senate Bill 9 that will give La Mesa some local control over implementing the state law.

Still, Vice Mayor Shu held his ground. “Real planners use what people do, not where the concrete necessarily ends,” he said. He further explained how the governing contexts for housing or transportation are different than for a cannabis dispensary, in which he seeks to increase path of travel, not decrease it.

Others on the City Council felt differently. “There’s more than 10,000 La Mesans who voted for Measure U,” reasoned Councilmember Colin Parent, who primarily voted “no” on the appeal due to the potential liability the City could face if they used their discretion to kill the project. “We have an obligation under the law to give voice and give effect to what they did.”

Vice Mayor Shu then cast his vote in favor of the appeal. Councilmember Laura Lothian and Mayor Mark Arapostathis also supported the appeal, while Councilmembers Baber and Parent voted against it, making the final margin as slim as it could have possibly been.

Following the vote, a press release from CASA called the result, "A major victory for public health and the safety of residents." It also quoted longtime La Mesa resident and community advocate Janet Castaños, who spoke at the meeting.

She called the proposed location "a 'recipe for disaster' and urged the council to not let big money, corporate-owned pot dispensaries like Urbn Leaf play games with La Mesa ordinances to circumvent zoning rules," stated the press release.

The gradual on-the-books industrialization of cannabis is playing out differently across the nation. Here in La Mesa, it’s a push and pull effort in deciding where the line should be drawn — literally.

Don't fool yourselves, they are Pot Shops. They make big money. Why else would someone own so many in one area. La Mesa has too many shops, so the owners send out delivery into other areas stealing their customers. A Successful Pot Shop needs at least 20000 regular customers. La Mesa has how many! 17? and counting. Population is 60000 so where do all the customers have to come from. La Mesa needs to start looking west down University and El Cajon Blvd. because that is what your city is going to look like in old downtown La mesa and Spring Street in 10 years. Then it will look just like its neighbor city Lemon Grove, that was once a beautiful quaint town as well! That was destroyed by the gangs and mishaps of spring valley. Just think, in a few years people on Mt Helix can drive down off the hill and it will be just like living on dictionary hill. Hit the streets below and you have a gun fight at 7/11, going to be so much fun lol

Who authored Measure U for La Mesa and failed to better clarify and foresee boundary loopholes which contributed to this fumble that will probably cost local taxpayers in a potential law suit?

Who has received the most benefit from Dispensaries, in the form of dollar Contributions, as a La Mesa Political Incumbent Candidate, since Measure U passed?