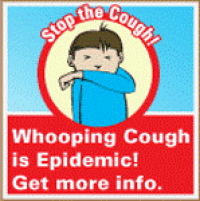 Another 102 new cases of pertussis, also referred to as whooping cough, were confirmed by local health officials, bringing the total number so far this to 454. That’s more cases than All of last year, when 431 cases were reported.

At this point last year, just 63 cases had been reported in January through May.

Recent cases have been occurring in schools and churches in El Cajon and Santee. The victims ranged between ages nine to fifteen.

Symptoms of whooping cough start with a cough or running nose for one or two weeks, followed by weeks to months of rapid coughing that sometimes end with a whooping sound. Fever, if present, is usually mild.

Antibiotics can lessen the severity of symptoms and prevent the spread of disease to others. The U.S. Centers for Disease Control and Prevention, or CDC, recommends going to local pharmacies that offer vaccinations, or visit your healthcare provider.

For more information about whooping cough and ongoing vaccination clinics, call the HHSA Immunization Branch at (866) 358-2966, or visit www.sdiz.org.