September 15, 2012 (Washington D.C)—The FDA has issued a report revealing that thousands of pet illnesses since 2007 have been linked to consumption of jerky pet treats.  Most complaints involve chicken jerky (treats, tenders, and strips), but others include duck, sweet potato, and treats where chicken or duck jerky is wrapped around dried fruits, sweet potatoes, or yams.

The FDA has received approximately 2,200 reports of pet illnesses which may be related to jerky treats. The majority of the complaints involve dogs, but cats also have been affected. Over the past 18 months, 360 dog deaths and one cat death have been reported. Cases have occurred in all 50 states and 6 Canadian provinces. The rise in illnesses and deaths corresponds with a sharp rise in imports of jerky treats from China.

Although the FDA has been actively investigating the reports of illnesses, no definitive cause has been determined. The ongoing global investigation is complex, multifaceted and includes a wide variety of experts at the FDA including toxicologists, epidemiologists, veterinary researchers, forensic chemists, microbiologists, field investigators and senior agency officials.

In the past 10 years, there has been a dramatic increase in importation of pet food from China. Human consumption of poultry in China largely consists of dark meat, leaving a large amount of light meat poultry products available for export. From 2003, when China first approached the USDA about poultry exports, to 2011, the volume of pet food exports (regulated by the FDA) to the United States from China has grown 85-fold (see table). It is estimated that nearly 86 million pounds of pet food came from China in 2011. Pet treats, including jerky pet treats are currently considered the fastest growing segment in the pet food market. 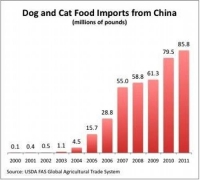 What are the signs of the illnesses?

The majority of the cases in dogs report primarily gastrointestinal signs, including vomiting and diarrhea, sometimes with blood and/or mucus, and can involve severe signs such as pancreatitis or gastrointestinal bleeding. The next most common signs relate to kidney function, including frequent urination, increased urine, severe thirst, kidney failure and some cases resemble a rare kidney related illness called Fanconi’s syndrome. Typically Fanconi syndrome is found in certain breeds of dogs that are pre-disposed to hereditary Fanconi syndrome (e.g. Basenji).

Progression of the investigation: What is being done about the problem?

Since 2007, the FDA has been actively investigating the cause of illnesses reported in pets which may be associated with the consumption of jerky pet treat products. Beginning in 2007, samples of products – collected at import, at retail stores, and submitted by consumers and veterinarians -- have been tested by FDA laboratories, by the Veterinary Laboratory Response Network (Vet-LRN), and by other animal health diagnostic laboratories in the United States for multiple chemical and microbiological contaminants. The Vet-LRN program is currently focused on testing products that have been submitted by pet owners whose pets have experienced adverse effects following ingestion of the treats. In addition, starting in 2007, the FDA reached out through the veterinary community to solicit tissue samples (blood, urine, feces, necropsy, etc.) that have been associated with active jerky pet treat cases, but to date; none of the testing results have revealed the cause of the illnesses.

To date, product samples have been tested for contaminants known to cause the symptoms and illnesses reported in pets including, Salmonella, metals, furans, pesticides, antibiotics, mycotoxins, rodenticides, nephrotoxins (such as aristolochic acid, maleic acid, paraquat, ethylene glycol, diethylene glycol, toxic hydrocarbons, melamine, and related triazines) and were screened for other chemicals and poisonous compounds. DNA verification was conducted on these samples to confirm the presence of poultry in the treats. The FDA’s testing of jerky treat product samples for toxic metals including tests for heavy metals have been negative.

In 2011, samples were also submitted for nutritional composition, including fatty acids, crude fiber, glycerol, protein, ash and moisture and other excess nutrients. The purpose of nutritional composition testing is to verify the presence of ingredients listed on the label. To date, none of the testing results have revealed an association between a causative agent and the reported illnesses.

The FDA is now expanding its testing to include irradiation byproducts and is consulting with the National Aeronautics and Space Administration (NASA) experts.

After increased complaints began in 2011, the FDA conducted five plant inspections in China during March and April 2012. These firms were selected for inspection because the jerky products they manufacture were identified with some of the highest numbers of pet illness reports. The FDA conducted the inspections to get a greater understanding of the manufacturing processes used to make the jerky pet treats and to see if this would help further the public health investigation. The FDA did identify that one firm falsified receiving documents for glycerin, which is an ingredient in most jerky pet treats. As a result of the inspection, the Chinese authority, the Administration of Quality Supervision, Inspection and Quarantine (AQSIQ), informed the FDA that it seized products at that firm and suspended exports of its products until corrective actions were taken by the firm.

The FDA has also reached out to U.S. pet food firms to enlist their help in this public health investigation and is seeking further collaboration on scientific issues and data sharing. No specific products have been recalled. However, if the FDA identifies the cause, or a recall is initiated, the Agency will notify the public.

What can pet owners do?

The FDA is reminding pet owners that jerky pet treats are not necessary for pets to have a fully balanced diet, so eliminating them will not harm pets. Commercially produced pet food contains all of the nutrients that pets need.

The FDA is advising pet owners who choose to feed their pets jerky pet treat products to watch their pets closely for any or all of the following signs that may occur within hours to days of feeding the products: decreased appetite; decreased activity; vomiting; diarrhea, sometimes with blood; increased water consumption and/or increased urination. If your pet shows any of these signs, stop feeding the jerky pet treat product. Owners should consult their veterinarian if signs are severe or persist for more than 24 hours, as it is important that your pet receive prompt medical attention. Blood tests may indicate kidney failure (increased urea nitrogen and creatinine). Urine tests may indicate Fanconi syndrome (increased glucose). Although most pets appear to recover, some reports to the FDA have involved pets that have died.

In addition, pet owners may want to continue to monitor information as it is posted by the FDA. The agency has continually updated the Questions & Answers document on its web site and will add information as it becomes available.

How can you help the investigation?

While your veterinarian will tend to your pet’s condition, you or your veterinarian can learn how to help the FDA’s Center for Veterinary Medicine (CVM) investigate your pet’s illness. Dr. Bernadette Dunham, director of CVM, shares how you can report a pet food illness on her blog from August 21, 2012. Cases of animal illness associated with pet foods can be reported electronically through the Safety Reporting Portal, or by calling the FDA Consumer Complaint Coordinators in your state.

If you’re looking for a SAFE, REAL ‘American Made’ chicken jerky for dogs or cats, we started making our own Chicken Jerky after we ran across the FDA warning of 2008 about Chinese chicken treats making dogs sick or killing them. It turned into a cottage "Mom & Pop" business and we now sell our TriPom Chews online and in 20 stores in the New England area. Our products are homemade, hand made, ‘Maine Made’, ‘American Made’ chicken jerky produced from whole, restaurant-quality chicken breasts containing NO Additives and NO Preservatives. Our 3 Pomeranians (our babies) taste test every batch for quality.

This has been going on for years. When will people learn to look at labels and buy only from whom they trust and China should not be on that list?  Unbelievable!