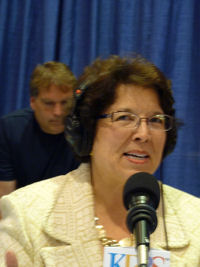 With 100% of precincts counted and only provisional and some absentee ballots remaining to be tallied, Democrat Scott Peters, a former City Council president, has 22.58% of the vote, a razor-thin lead over former Assemblymember Lori Saldana, who has 21.98%.

The race included several lesser-known candidates who placed as follows:
With around 13% of voters casting ballots for candidates other than the top 3 contenders, the wild card in this race will be who those voters choose to support. While it’s likely that liberal Saldana voters would line up behind Peters rather than the conservative Bilbray (or Peters voters shift allegiance to Saldana, should she win in a race still too close to call), it’s a tough call to predict what those who voted for candidates who listed no party alliance will support. Nor is it a safe assumption that all who snubbed Bilbray to vote for lesser-known Republicans will necessarily fall in line come November.
Saldana, who mounted a tough campaign centered on her progressive record, had not conceded as of late last night, though the long-time liberal champion’s chances waned as the evening wore on. Jack Doyle, former Santee Mayor who ran with no party affiliation listed, and Tea Party favorite John Stahl also faced disappointments in their quests to wrestle a top spot from better-known and better-funded opponents.
Bilbray faces a tough race as pressures on the campaign trail intensify.  An independent expenditure PAC that formed during the primary also targeted Bilbray, urging voters to support “anybody but a lobbyist,” citing Bilbray’s past as a registered lobbyist and recent record of taking large contributions from special interests, then voting for their agendas.
For Democrats, meanwhile, the redrawn 52nd Congressional election is being targeted at the national level with major funds, as the party aspires to snatch a House seat away from Republican control.

When you add the other GOP in the race to Brians total he easily out distances either person from the democrat side. Brian should be re elected with at least a 6 point edge perhaps higher, especially once Brian starts focusing on the horrific record of Scott Peters while on the council. Scott one of the main reasons the City of San Diego is broke.