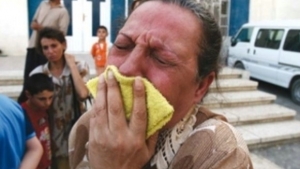 “Innocent Christians are beheaded, crucified and their women and children are being traded on the sex enslavement market,” the petition states.  “Their children are also being raped and beheaded. It is very important to preserve the indigenous Assyrians of Iraq including the Chaldean and Syriac churches. They are the cradlers of civilization and Jesus spoke their language of Aramaic.”

Some 40,000 Iraqi Chaldeans and Assyrians now live in East County.  Over 1.5 million more have been displaced from their homes in Iraq, where churches have been burned, priests and bishops murdered.

East County Magazine asked Mark Arabo, a national leader of Iraqi Christians in the  U.S., his views on this petition.

“From the beginning, we have stressed a comprehensive approach to the struggles facing our brothers and sisters in Iraq,” Arabo says. “We need greater humanitarian aid to reach the displaced people of the north, safe passage must be established for those who seek haven in foreign lands, and there needs to be security for those who wish to stay within Iraq.”

As for arming the Christians, he states, “If this petition serves in furthering the goal of a secure zone within Iraq, then I am completely supportive of it. The means with which this security will be established will require an armed personnel. My concern is simply ensuring that this process is done in both a secure and transparent fashion. We cannot risk any weaponry reaching the hands of potential enemies,” he adds.

The East County Iraqi-American leader concludes, “I look forward to a day when the religious minorities of Iraq are able to function in a self-sustaining manner within the country of their choosing. My hope is that a dual approach for security within Iraq, and safety outside of Iraq will be achieved in the future.”