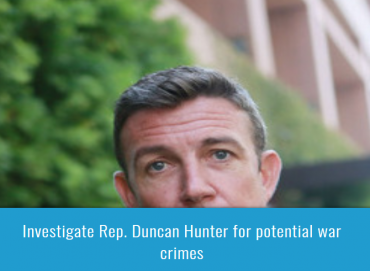 September 10, 2019 (El Cajon) -- A Muslim group is pushing for the House to formally investigate and censure San Diego Representative Duncan Hunter for alleged war crimes. On Monday, Sept. 9, they delivered a petition with 8,000 signatures to House Speaker Nancy Pelosi’s office.

While the signatures from the MPower Change petition was delivered to Speaker Pelosi’s office in San Francisco, the council on American-Islamic Relations (CAIR) San Diego held a press conference outside of Hunter’s El Cajon office about the allegations.

The nonprofit is the largest Muslim civil liberties and advocacy organization in the U.S., with a stated mission of enhancing understanding of Islam, protecting civil rights, promoting justice and empowering American Muslims.

Hunter, who represents the 50th Congressional district, has already been stripped of his committee assignments as he faces 60 federal charges of misusing campaign donations for personal use and filing false reports to cover up the misappropriation of funds. However, CAIR San Diego Executive Dustin Craun said lawmakers are overlooking Hunter’s worst deeds.

“We're not interested in the 2020 election with this. We're saying that as many bad things that are about him in the press, the worst thing about him that he's actually a self-admitted war criminal. We wanted to bring light this fact. He said it publicly and then it was kind of swept under the rug. If you admitted to killing perhaps hundreds of civilians and that's not a big deal — what world do we live in?” Craun said. “When it comes to investigating war criminals, that should be a bipartisan reality.”

The accusations of Hunter committing war crimes during his three combat tours in Iraq and Afghanistan stem from two admissions he made while defending Navy Seal Eddie Gallagher.

Gallagher was later found not guilty of murdering a prisoner during wartime,  but guilty of posing with the prisoner’s body.

In an interview with the Zero Blog Thirty podcast, Hunter defended Gallagher by saying, “I was an artillery officer and we fired hundreds of rounds into Fallujah, killed probably hundreds of civilians, if not scores, if not hundreds of civilians. Probably killed women and children if there were any left in the city when we invaded. So do I get judged too?"

In addition to allegedly indiscriminately killing civilians, at a town hall in San Diego, Hunter said he posed for photos with corpses, which is barred in the U.S. military code of conduct. “Eddie did one bad thing that I’m guilty of too — taking a picture of the body and saying something stupid... I’ve taken pictures just like that when I was overseas,” the Congressman said.

The petition states, “There hasn’t been any formal action taken regarding his admission of participating in the killing of ‘hundreds of civilians’ and posing with corpses as if they were hunting trophies."

In his hard-fought 2018 midterms race against Democrat Ammar Campa-Najjar, Hunter was accused of running the most anti-Muslim campaign in the country because he repeatedly tried to tie his opponent to terrorism and attacked his Palestinian heritage, though Campa-Najjar is Catholic. Hunter even claimed in an attack ad that Campa-Najjar accepted campaign contributions from CAIR in a “well-orchestrated plan to infiltrate Congress.”  However, a report revealed the Democrat did not receive any money from the organization, and since the civil rights group is a tax-exempt 501(c)3, it cannot be involved in politics. The group also does not officially endorse candidates, though several CAIR volunteers and board members did donate to Campa-Najjar’s campaign. At the time, Hunter linked CAIR to terrorism, without substantiation.

In response to the petition delivered to Pelosi this week, Hunter’s office released a statement which reads,“For several years, the local chapter of CAIR has attempted to malign Congressman Hunter with these types of orchestrated stunts in an effort to provide political support for their endorsed candidates, one of which is currently running against Congressman Hunter. This approach hasn't worked in the past, and it will not work now for the simple reason that  anti-Semitic organizations that openly support terrorism warrant zero attention and have zero credibility.”

Craun pushed back on the claims made in Hunter’s statement.

“CAIR is a mainstream national Muslim organization, the largest Muslim social justice organization in the United States. To call us anti-Semitic when Muslims and Arabs include Semitic people is ridiculous. And then to call it a terrorist organization is racist and Islamophobic,” he said.

Craun believes the alleged war crimes and campaign attacks all stem from the same motive: Islamophobia.

According to Craun, Pelosi’s office suggested the group submit their complaint about Hunter to the Committee on Government Oversight, which CAIR plans to do soon.