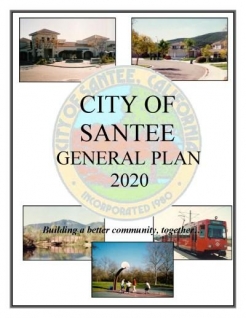 Backers say that the Santee General Plan Protection Initiative, if approved by voters, would protect Santee from overdevelopment and prevent resultant traffic gridlock. It would do so  by amending the Santee General Plan to require a vote of the people for development projects that would increase density or otherwise intensify land use over the amounts currently permitted by law.

Without the Santee General Plan Protection Initiative, there will not be any requirement to place approval of a massive traffic-generating project on the ballot for the consent or rejection by resident voters. City Council members potentially influenced by campaign contributions from special interests will make the decision, a website devoted to the initiative states, adding, “Santee citizens need and deserve a greater voice in order to maintain Santee’s quality of life.”

Councilman Houlahan says, "Currently, voters do not have a right to vote on controversial projects that threaten overdevelopment. We want to give voters that right.”

“Santee residents can get involved gathering the 3,129 valid voter signatures needed to qualify the Santee General Plan Protection Initiative soon. We hope to start gathering them once the posting period is completed a few weeks from now,” said Van Collinsworth.

Text 619 265 6022 (text only) to sign the petition. We will gladly meet you to obtain your signature. This is THAT important to our quality of life and community in Santee!