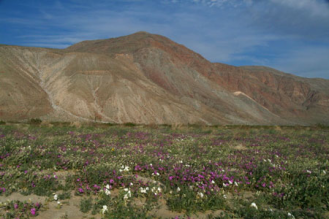 “Without significant input from the public, from you, this juggernaut will proceed relentlessly, sacrificing millions of acres of desert habitat, wasting precious groundwater, degrading air quality, and “taking” endangered species and other wildlife.” —David Garmon, Borrego Springs, petition author

November 28, 2014 (San Diego’s East County) – Environmentalists have launched a petition at Moveon.org asking the public to sign in opposition to the Desert Renewable Energy Plan, which would open up millions of acres of California deserts to industrial-scale wind and solar projects. Instead, environmental leaders want the California Energy Commission to do an analysis of rooftop solar as an alternative.

The petition states: “More renewable energy is available from rooftop solar in San Diego and Los Angeles Counties than will be derived from the siting of utility-scale generating facilities on 2 million acres of desert habitat called for in the Desert Renewable Energy Conservation Plan. The unintended consequences of utility-scale facilities in the desert are becoming known and are unacceptable--dust storms in Lancaster, midair incineration of birds at Ivanpah, depletion of scarce groundwater in Borrego Springs.”

The petition was started by Borrego Springs resident David Garmon, president of the Tubb Canyon Desert Conservancy. It is supported by the Desert Protective Council in San Diego and by Basin and Range Watch, another southwest environmental protection organization.

Garmon, author of the petition, says the plan was well-meaning, ie to reduce greenhouse gas emissions, but has disastrous consequences—and there are safer and greener ways to produce the same power locally.  “The road to Hell is paved with good intentions,” he says of the DRECP, which covers 22.5 million acres of Southern California, including 268,acres in San Diego County in the Borrego Springs area.

Terry Weiner, head of the DPC, writes, “The DPC disagrees with the premise of the DRECP, which is to continue expanding renewable energy development in our beleaguered California desert. We are learning from the photovoltaic solar developments in Imperial County that the “lake effect” of the panels from a birds-eye view has caused the death of over 150 species, and thousands of individual birds. Birds are being incinerated in the solar flux at the Ivanpah Solar Power Tower project in the Mojave Desert.”

She adds, “We know that developers are allowed to scrape clean all plant and animal life on a solar or wind project site and the consequent loss of soil and plants is creating huge dust clouds in the desert. Impacts to other mammal species from these industrial-scale projects are virtually unknown. Also unknown is what the cumulative impact on the desert ecosystem would be with the addition of hundreds of remote, large-scale energy projects, along with climate change and ongoing down drafting of desert aquifers.”

The environmental leader asks, “How can we in good conscience allow carving up of more of the California desert when there are still hundreds of thousands of rooftops that could be producing solar energy and helping us meet our renewable energy goals?”

Chris Clark at TV Los Angeles called the plan “bad for democracy:  KCET on the DRECP.

The public comment period has been extended until February 23, 2015. You can send official public comments to docket@energy.ca.gov.

Petition sponsors provided some suggestions as to comments you may want to make, or, you can simply click here for a ready-to-send pre-addressed email letter that you can sign as-is or modify with your own words. Alternatively you can, download this text file to copy/paste into your preferred email program.

The major utilities,, including Sempra, PG&E and Southern California Edison all support the plan—and would profit from it.

Not all environmental groups oppose the plan. The Sierra Club, Nature Conservancy and Center for Biological Diversity officially support the plan and industrial-scale wind and solar.  Locally, many members of San Diego’s Sierra Club oppose such projects but the national Sierra Club has prohibited local chapters from taking stances against any big wind or solar project, no matter how destructive it may be.

“In the five years it has taken to create the “draft” DRECP there have been significant advances made in rooftop solar technology,” Garmon points out. Prices have decreased and efficiencies have increased. This past July, UCLA’s Luskin Center published a report estimating the amount of generating capacity that could come from rooftop solar just in the Los Angeles area alone is over 19,000 megawatts.

The chief advantages rooftop solar are: 1) it would eliminate the need to “sacrifice” millions of acres of desert habitat to build “utility-scale” generating plants, 2) because it generates electricity where it is used, rooftop solar would eliminate the need for giant transmission lines that lose electricity every mile along their lengths, 3) rooftop solar would eliminate the unintended consequences associated with utility-scale generating plants sited in the desert that we are only now beginning to learn about such as dust storms arising from scraped desert habitat, utilization of excessive amounts of ground water, and the inevitable “taking” of endangered species and other wildlife as is occurring at Ivanpah.

“This rationale implies that anything that does not result in the creation of utility-scale generation facilities is in actuality not an alternative at all,” says Garmon… “The perverse rationale implied by the above reasoning is that we cannot pursue conservation goals unless we are simultaneously “sacrificing” millions of acres of desert habitat.

He adds, “The only thing now standing in the way of the “draft” DRECP becoming our lived reality is you… Without significant input from the public, from you, this juggernaut will proceed relentlessly, sacrificing millions of acres of desert habitat, wasting precious groundwater, degrading air quality, and “taking” endangered species and other wildlife.”

I just signed the petition. Please help save our desert land from industrial energy projects.
Could you not find anyone but moveon-to-socialism.org to host this petition?