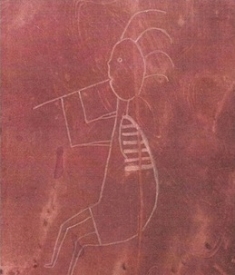 Now an online petition implores President Barack Obama and U.S. Secretary of the Interior Sally Jewell to stop the destruction of these sacred sites near Blythe, California along the Colorado River.  A related spoke wheel geoglyph in Ocotillo  was also at risk and now stands surrounded by wind turbines.  But now an ancient Kokopillo is at risk of being destroyed completely.

“The link below is a petition to the federal government to stop the destruction of the sacred sites along the Colorado River which for the Mexica (Uto-Aztecan) represents its history and cosmic culture tradition and the facts that we have show that the surrounding the area of the lower Colorado River Basin is the place of creation,” said Alfredo Figuero and Patricia Robles with La Cuna de Aztlan Sacred Sites Protection Circle.  Figueroa recently spoke in San Diego on this issue.  “We would greatly appreciate if you can send this to all your contacts so we can get thousands of signatures. We want the world to know the travesty caused by the solar power projects and destruction that is continuing of the sacred sites, Creator's images along the Colorado River. Thank you for helping us save these most sacred sites.”

Thank you, Dennis. The pleasure is mine. I am pleased that you enjoyed the biographical collection of historical and contemporary Native American women who were or are accomplished aerospace pioneers, Olympic champions, prima ballerinas as well as champion Traditional dancers, medical doctors, educators, as well as in many other areas. I am looking forward to reading your review! KB Schaller, Author 100+ Native American Women Who Changed the World Winner, International Book Award, Women's Issues http://www.amazon.com/-/e/B007O46N0G
The preservation of such sites should be considered an integral and very important part of America's history, not just the history of its Indigenous peoples. While progress has its place in society, so does a past that existed long before the Euro-American empire swept across this continent. We shall never know by whose hands these etchings were made, but their existence should give pause for us to reflect on who these people were, what their lives were like, and the fact that they were once just as real as those of us who exist today. To destroy the last physical vestiges of their existence is to erase all evidence that they were once here from the earth. It is my hope that a common sense of honoring and respecting a past that binds us all will not allow such a travesty to take place. KB Schaller, Author 100+ Native American Women Who Changed the World Winner, International Book Award, Women's Issues http://www.amazon.com/-/e/B007O46N0G
K.B., having recently gotten my hands on your book; "100+ Native American Women Who Changed The World," I hope to amplify your comments here during he course of my writing a review of this wonderful book. Some of what is being said about your book comes from Carole Di Tosti, PhD, who states: "This collection of 100+ Native American women movers and shakers has long been overdue. Native American women's stories are a vital part of American history and women' history." I concur with Dr. Di Tosti, that this book is long overdue. I am honored that you have given me the opportunity of writing a review of this book for the East County Magazine.