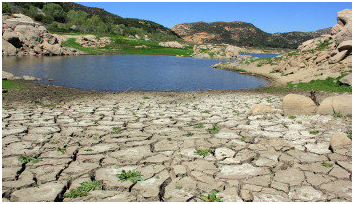 July 26, 2016 (Lake Morena) – An online petition has been launched asking the City of San Diego to stop draining Lake Morena and Barrett Lake. Rural residents seek help from San Diego residents and all who are concerned about wildlife or the prospect of a devastating firestorm to sign the petition.

The petition, posted by Campo resident Karen Noblitt-McIntyre, accuses San Diego officials of ignoring public safety, noting that two residents died during the recent Border Fire. Firefighting aircraft were diverted to water sources farther away due to lack of water in these lakes, witnesses stated in recent public meetings.

The petition states that the city has put wildlife and rural communities at risk, also failing to live up to its promise to repair the dam at Lake Morena. The city drained Lake Morena to less than 3% of capacity and Barrett Lake to below 6% of capacity, public records indicate.  Although San Diego claimed it needed drinking water during the drought, the city did not ask its residents to conserve water before draining East County’s lakes.  The water was pumped to Otay reservoir, which overfilled when rain fell, so the city dumped the precious water supply into the ocean.

City officials have thus far ignored pleas from rural residents.  A spokesperson for Mayor Kevin Faulconer advised ECM that the city has no plans to take corrective actions to reverse the damage or reduce risks to rural residents and wildlife.  The draining commenced during Mayor Jerry Sanders administration but was ordered halted by Mayor Bob Filner to protect the public, however that order was again changed after Filner left office and the draining resumed.

The petition calls for the city to take four actions: stop draining the lakes until water levels are restored (through natural rainfall), immediately repair the dam at Lake Morena, balance needs of rural vs.city residents as well as wildlife and groundwater impacts before making future water withdrawals, and keep at least a 50% capacity at both lakes in the future.

Below is the full text of the petition:

Save Lake Morena: We demand that the City of San Diego to stop draining East County Lakes

Whereas, the City has drained the Morena and Barrett reservoirs abusively, without regard for the needs of public safety, wildlife or the valuable resource it drains from watersheds that belong to East County property owners and the public, and

Whereas, the City has dishonestly claimed that it must keep lake levels low because it intends to renovate the dam at Lake Morena, but it has failed to do so as the months become years, and

Whereas, this failure to maintain City property makes the City a negligent property owner who fails to live up to the public trust given to City officials by the people of San Diego, and

Whereas, the City’s historic need for this water is obsolete, given that it has numerous other sources, including irrigation supplies taken from El Centro farmers, Metropolitan supplies taken from state reservoirs and desalinated water taken from Carlsbad – making Lake Morena’s tiny contribution more suitable for conservation as an emergency supply, and

Whereas, the state’s new groundwater law may require that the current Lake Morena lease between the City and the County be revised to treat rivers, streams, lakes and aquifers as a connected hydro-logical system, as the new law explicitly acknowledges the ground-to-surface water connection and requires local agencies to apply “conjunctive” management of ground and surface water, and

Whereas, the City has frivolously thrown this valuable resource into the sea because its primary reservoir had no room for the water – a wanton waste of a resource taken from others, and

Whereas, wildlife, recreation, fire protection and local aquifers have suffered as a result of this willful mismanagement, and

Whereas, numerous catastrophic fires have devastated urban neighborhoods and rural communities, highlighting the need for readily available water to keep fires from rampaging through wild lands and into cities that are not prepared to defend from them, and

Whereas, deaths have resulted from these fires, most recently in the 2016 Border Fire, which killed two people, and

Whereas, the extra time that it takes to fly the water from lakes further from back-country fires hinders firefighters and gives the fires time to develop into firestorms that place everyone and everything in mortal danger, and  Whereas, the Lake Morena Views Mutual Water Company, after providing water to firefighters for the Border Fire, had to buy water from Pine Valley Mutual Water Company to refill its depleted service tanks – thereby incurring direct costs for the ratepayers.

1. The City of San Diego cease all draining of Lake Morena and Barrett Lake until the lake levels are optimum for people, groundwater, wildlife and firefighting capability.

2. The City of San Diego immediately commence repairs to the Lake Morena dam so water can be saved, instead of dumped into the ocean.

3. Future water withdrawals from the lakes are done with careful consideration of the balanced use of this vital resource for city and rural residents, as well as groundwater, wildlife and public safety.

4. The water volume in the lakes, in future, is kept at 50 percent or more so that water accumulated from local watersheds remains adequate to serve the needs of all.

This petition will be delivered to: