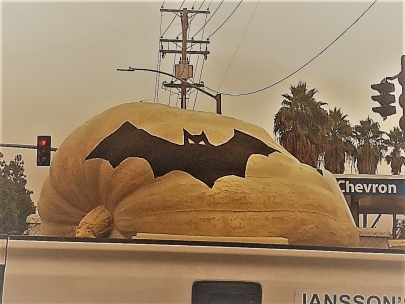 J. Jansson-Berndes says he supplied the special seeds and Vince George grew it under his tutelage. It weighs 1,036 lbs.-- more than half a ton.

Jansson-Berndes drove up with the pumpkin to participate in the Irvine Park Railroads'  2019 Great Pumpkin Weigh - Off. But it wasn't the biggest entry!

The winner was Ruben Frias of Napa who won with a 1,758 pound pumpkin.

Jonsson-Berndes says he now will drive around the area with the pumpkin in his truck trying to "make people smile."

"I pulled up right behind the truck. Everyone around me, and I, were in shock," Jefferis-Williamson writes in an e-mail to ECM.  "The whole bed of the truck plus was FILLED with the batman pumpkin."