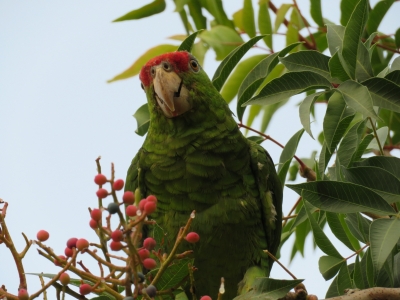 These well known, beautiful birds, displaying bright colors of green and red, are notorious for their loud, gregarious behavior as they begin a typical day early - no alarm clock needed -- foraging for food while displaying acrobatic antics for people to watch.

They provide plenty of photo opportunities for beginner, and pro photographers alike, but one has to be fairly quick, because these exotic birds don't stay in one place for very long.

While they are flying around El Cajon and many other San Diego cities, you can hear them "talking" from very far away. They fly in disorganized groups from to just a few, yet usually 20, 30, or  even more.  I'm sure many people can't tolerate the cacophony of sounds they make for very long. These birds can get quite annoying after awhile.  But many other people do appreciate these beautiful birds.

Sadly, they are an endangered species due to humans profiting from capture and trade, plus huge losses to their natural habitats from destruction by mankind. Consequently, not many survive these days. They are listed on the International Union for Conservation of Nature (IUCN) “red list” as endangered, largely due to habitat destruction in their native northeastern Mexico.

There are now thousands of these parrots thriving in the wild in the United States including California and other southwestern states, as well as Hawaii, Forbes reported in 2016.  Some biologists estimate there may be more in the U.S. now than in Mexico, providing a biological lifeline that could help save the species.  Red-crowned Amazon parrots have not yet been added to the U.S. Endangered Species list, however, as experts debate whether the birds winged across the border on their own to establish populations here, making them natives, or whether the local populations are the results of smuggled birds or pets released into the wild.

My conservative estimated count for this particular flock (pandemonium) that hangs around the downtown El Cajon area and roosts by the San Diego county courthouse (much to the dismay of some Senior Tower residents) is around 100.  It's not easy to figure, however, because they are always moving, flying erratically from one spot to another, foraging for something to eat, or just "chatting" among themselves.

Lori Saldana posted a photo on Facebook showing one of these parrots eating sunflower seeds, perched on a giant sunflower she'd planted in her garden.  So if you want to help the birds out and don't mind some squawking, you may want to plant a few giant sunflowers in your yard.

My mom used to grow them and got blue jays that would eat the sunflower seeds, too.

Good picture. I haven't seen them in Lemon Grove in a long time. There's a Pecan tree in the neighbors yard and they like to eat the nuts.