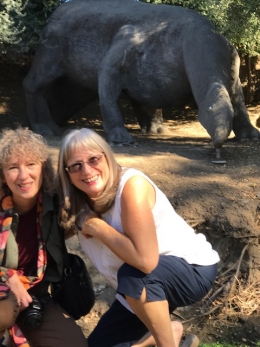 But we did find the last remaining dinosaur  statue from Dinosaur Land, a roadside attraction in the early 1960s, that still stands today along a creek bed in the Alpine Mobile Home Estates on Alpine Boulevard in Alpine, California.

Most of the ten original dinosaurs created by WIlliam Swan have vanished, removed or crumbled away, along with amusement rides long gone.  But this brontosaurus has been repaired and still stands. The oriiginal park was slated to have a roller coaster and miniature volcano, but lack of funding ended the venture after just a year or two.

"Bob the Brontosaurus" has survived vandals, homeless living in its belly, and residents who decorate him for the holiday season.

You can view a video with photos of some of the other long-gone dinosaurs here:  https://www.youtube.com/watch?v=L1phPZ3-BhI.  Read more:  https://www.roadsideamerica.com/tip/6957?offset=5