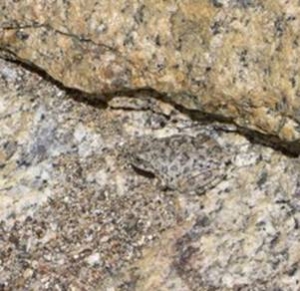 December 18, 2015 (Descanso) – Can you spot the California Tree Frog  (Pseudacris cadaverina) in this photo?

It blends in quite well with the granite background in this image taken in Descanso by Duncan McFetridge.

"Mr. McFetridge’s photo of the treefrog is a very classic example of their habitat and behavior and it is great to see a photo of a local amphibian as the photo of the week," says Chris Brown with the U.S. Geological Survey, Western Ecological Research Center, who identified the well-hidden amphibian for us.

You can read more about the California Tree Frog here: http://www.werc.usgs.gov/ProjectSubWebPage.aspx?SubWebPageID=32&ProjectID=75&List=SubWebPages&Web=Project_75.

Note: our staff initially thought the image might show an endangered Arroyo Toad, hence we put out a call for expert help to identify this remarkable creature. We were mistaken; the markings are similar.  Read about the Arroyo Toad at http://www.werc.usgs.gov/ProjectSubWebPage.aspx?SubWebPageID=40&ProjectI....