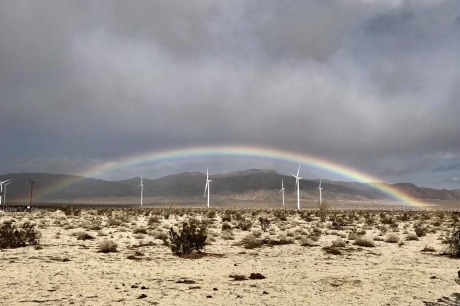 December 24, 2016 (Ocotillo) – Parke Ewing sent this stunning shot, perfectly composed, of a rainbow arcing above wind turbines in the desert at Ocotillo on Christmas Eve after the storm.

Residents have long complained about the turbines marring desert views.  So when Ewing posted this image on Facebook, it received some equally creative comments.

Iris Sloan noted that the turbines have produced “pots of gold for Pattern Energy.”

Dennis Schwettmann quipped, “The mother ship has come to remove her probes!”

Randy Hall concluded, “If it weren’t for those turbines it would be a real perfect picture. But it is still beautiful.”