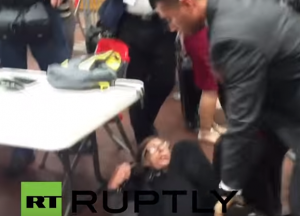 According to CNN, the photographer, Chris Morris, was attempting to leave the media pen to photograph a Black Lives Matter protest that had erupted when a Secret Service agent placed two hands on his neck and slammed him to the ground.  The attack was captured on video and posted on social media by an attendee of the rally.

Time Magazine reported on the attack on its photographer, posting several videos on its website, including one where Morris is shown swearing at the agent just before the attack.  Another video shows Morris kicking the agent and putting his hands on the agent's neck.  Morris reportedly did this to "...demonstrate the choke hold he had just experienced," according to the article, which was written by "Time Staff."

A spokesman for the Secret Service said that the agency is aware of the incident and will provide further details after it reviews the facts. Meanwhile, Trump campaign spokeswoman Hope Hicks requested that all questions be directed to law enforcement. Morris was not harmed and says he does not plan to press charges.

On Friday, Trump blasted media outlets such as the New York Times and Washington Post for their coverage of his campaign and threatened to roll back First Amendment freedoms of the press if elected.  “With me, they’re not protected, because I’m not like other people,” he stated at a rally in Texas, CNN video reveals. “We’re gonna open up those libel laws, folks, and we’re gonna have people sue you like you never got sued before.”