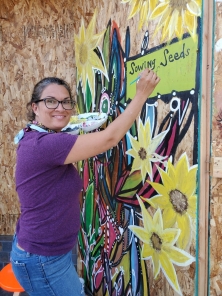 June 6, 2020 (La Mesa) -- Artists from Art Beat San Diego have been volunteering this week to paint colorful murals in downtown La Mesa, beautifying plywood used to board of broken windows and protect undamaged businesses at the La Mesa Springs shopping center and along La Mesa Boulevard.

The action comes after the May 30 rioting, which led to vandalism of dozens of downtown businesses, looting of many, spot fires in several stores and burning down of three buidings (Chase Bank, Union Bank, and a historic building that housed the Randal Lamb engineering firm).

From butterflies to a beach scene, the images are bringing smiles to the faces of many as La Mesa works to rebuild. 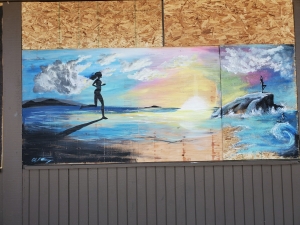 Hundreds of volunteers came forward to clean up the town after the night of violence, showing La Mesa's spirit of resilience.

A GoFundMe started by Phil Ortiz and the East County Chamber of Commerce to help La Mesa's impacted businesses recover has raised over $160,000.

Some messages also reflect themes of inclusivity and empowerment. 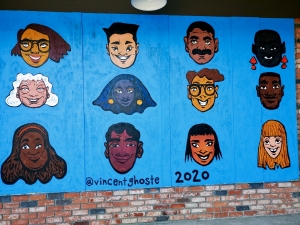 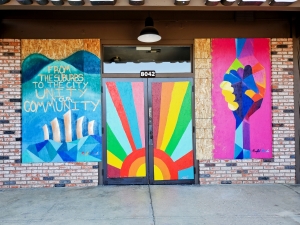 One painting portrays George Floyd, the black man killed by a Minneapolis police officer facing a murder charge.  Someone has left flowers left at its base in his memory. 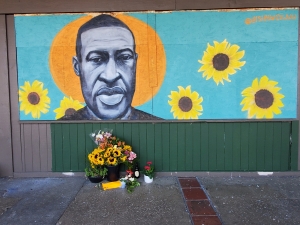 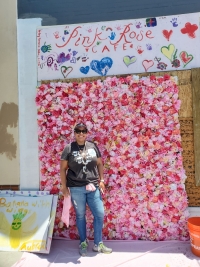 One local business owner created an artistic statement of her own. 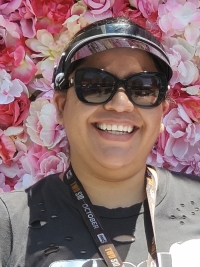 At the Pink Rose Cafe, which was set to open just as the pandemic forced closure of local businesses and later endured boarding up the storefront to protect against looters, the owner has filled the facade with pink silk roses, symbols of beauty and hope for a new beginning soon.

Each business owner was consulted about the motif to adorn their temporary storefront.

At Maxwell's House of Books, the owner chose a literary quote by George Orwell: "The further a society drifts from the truth, the more it will hate those who speak it."

According to Councilmember Kristine Alessio, efforts are now underway to find a permanent place to display the artwork after the plywood is removed from area businesses, providing a permanent exhibit to memorialize beauty that came forth from La Mesa's darkest days. 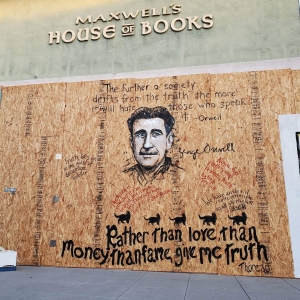